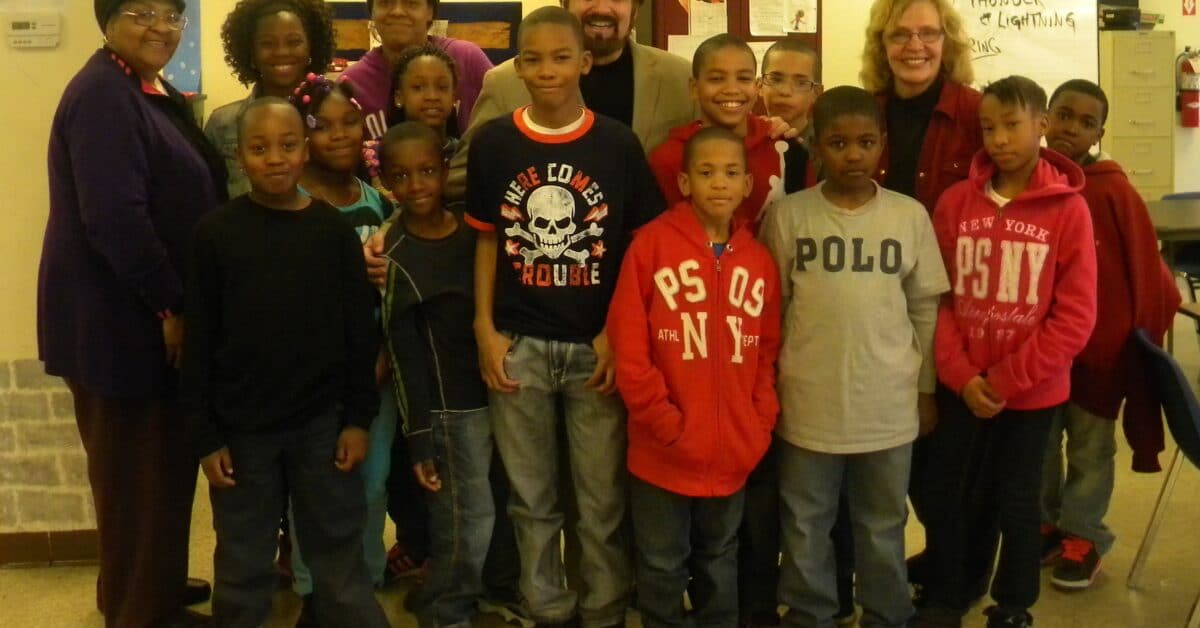 Maestro Maull with some of the campers and staff from Camp YDP, Paterson, New Jersey

On Steve Hoffman Music Forums there’s an interesting conversation going on around the topic: Is it OK to NOT like classical music? For a look at the thread, click here. We might also ask: “Is it OK to not like sushi, broccoli, rice cakes, Robert DeNiro films. . .the list could go on ad infinitum. I personally feel it’s OK to not like anything under the sun – you fill in the blank. Who is better qualified – beside you – to be the arbiter of your tastes and preferences? But I think we might be asking the wrong question.

Certainly, failure to notice detail in music will not lead to fatalities. It’s more like the difference between looking at our world through corrective lenses that help us see every beautiful aspect of that flower garden instead of a pleasant, blurry array of color. Whether we like the flower garden or not is a decision we can make as we gaze on every subtle detail of the rose petals. But lacking this precise view of things, any decision we make will be based on inadequate information.

One of the thoughts expressed in this forum recounts the familiar generational argument. “The overall popularity and sales of classical music, especially of the stuff made before, say, the 50s, is diminishing, and that is no accident, as the generation that classical music is culturally relevant to is dying off. And younger generations, starting with WWII baby-boomers, have other types of music they are interested in, such as jazz or blues. By the way, many of the same arguments for jazz and blues are similar to the ones for classical, and I’m starting to see hints of it with rock vs. hip-hop music as well. So, I’m wondering if it is a generational thing where the aging generation is trying to assert their cultural identity in a last gasp before it passes into history.”

As I have said in a previous blog, for me – the ‘when was it written’ aspect of a musical composition is completely irrelevant. If we receive, with an open mind, each piece of music we encounter as a singular event to be taken or left on its own merits, it doesn’t really matter whether it was written yesterday or one thousand years ago. If we like it – we like it – just like a piece of jewelry or pottery. If a ring catches our eye’s fancy, it doesn’t matter if it was crafted last month or two hundred years ago.

I personally use one standard for deciding whether I like an individual musical work regardless whether it is rock, pop, classical, sacred, vulgar, old, new, etc. If I listen to it, that is, give my undivided attention to it – enough times – to absorb and understand its rhythms, melodies, textures, harmonies, dynamics, timbres and form. . .if I still don’t like it then it’s OK!

In the past four days, I’ve paid two visits to Paterson, New Jersey – one visit to the young people at the Camp YDP after school program and the other to be with the students in the Paterson Music Project, modeled after the El Sistema program imported from Venezuela. As we listened together to music – with an emphasis on noticing detail – we did not speak of when the music was written. We barely spoke of who wrote the music. But I can tell you that the YDP campers had no problem recognizing a repeating melody. And more than a few of the young string players of the Paterson Music Project quickly noticed when I played the ‘wrong music’ on purpose – just to make sure they were really listening to and not just hearing the music.

Did these 2nd through 8th grade students enjoy the music of Vivaldi and Bach? They seemed to. I never mentioned that it was classical music or that it was nearly three hundred years old! It was just enjoyable music. I wonder what the response would have been had I begun my presentation with these words: “Today we’re going to listen to some classical music. It is ‘GREAT MUSIC’ and because it is considered to be ‘GREAT MUSIC’ – you should pay attention and you should like it!”