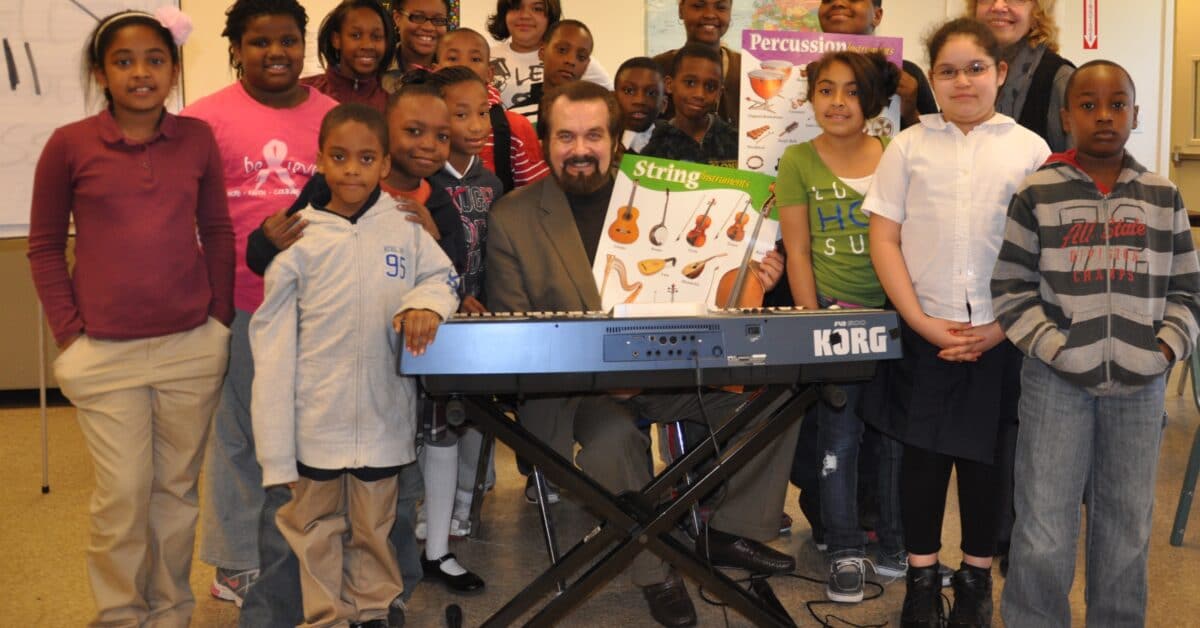 A recent visit to C.A.M.P. Y.D.P. in Paterson, New Jersey proved overwhelming – in best sense of the word – even for this old hand at music education. The Discovery Orchestra began its relationship with C.A.M.P. Y.D.P. three years ago as part of our outreach activities. In their own words: “CAMP YDP is a non-profit organization seeking holistic solutions to the complex needs of the Northside of Paterson by empowering families educationally, socially, economically and spiritually. . .To this end, Camp YDP engages families through a daily After-School Program and Pre-School.”

The elementary and middle school aged children of the program are always happy to see me when I arrive, eagerly asking “Are we going to do music?” and offering to help unpack my gear. During my visits, the ‘order of business’ is characteristically in a state of flux owing to the fact that students are coming and going – arriving in small busloads and being picked up by parents on no apparent schedule. This is all taken in stride – just one aspect of this safe and very positive environment created by the caring staff of the Youth Development Program.

When I begin our listening lessons, it is sometimes difficult to assess whether I have the entire contingent present or whether I will even still have the all the same students by the time we’ve finished. But this, too, is just accepted reality. We always have a good time.

On this particular day I decided we would investigate the Stars & Stripes Forever by John Philip Sousa. It seemed likely to me that some of the students would have encountered this music before. We began as usual with a listen to the five-minute march straight through – preceded by the instruction: “When the music ends I’ll ask you which instruments were playing.” We have large posters with photos of all the families of instruments, so when I held up the string family first, I was greeted by jeers and enthusiastic cries of “No – not them!” It’s fun to intentionally ask for the negative response!

We then began to identify the sections of the march’s form: ‘Intro, A, B, Trio, Bridge,’ and I passed out rectangles on colored construction paper with the individual sections in large print to whoever wanted to be that theme. We had lots of ‘A, B and Bridge’ takers – what’s not to love about the incredible trombone passage that is the Bridge – but only one student wanted to be the Trio. Fine.

After we learned the music that went with each designated section and could recognize it out of context in random samplings of music, it was time for the big moment. We would listen to the entire march played again, but now students would stand with their construction paper theme designations held high when their music was being played. It worked pretty well – only a couple of students seemed confused. Even better, by now, the rhythm of the march had so infected them, that even when it was not their turn to stand, most students could not resist tapping their feet or clapping to the beat. The one young man who was the Trio literally beamed each time he stood up alone.

Was it time for the class to be over? It seemed so due to people coming and going. But then it occurred to me on the spur of the moment to ask something I’d never asked in any of my previous visits: “Who would like to listen to the march again?” Loud shouts of “Yeah!” and “Me” with hands in the air erupted. A group of elementary and middle school students had just asked to listen to a five-minute abstract piece of music with NO WORDS – again. And so we did.

As this happened, some continued to raise the symbol of their theme when it was played. All applauded at the conclusion, and as we posed for a group picture. . .even more hugs than usual. An unexpected bonus in the form of ‘The Discovery Orchestra’s $64,000 Response,’ came when a CAMP YDP board member who was there said: “I’ll never listen to that piece the same way again. That was really something!” As I said at the beginning of this blog: “Overwhelmed – in the best sense of the word.”