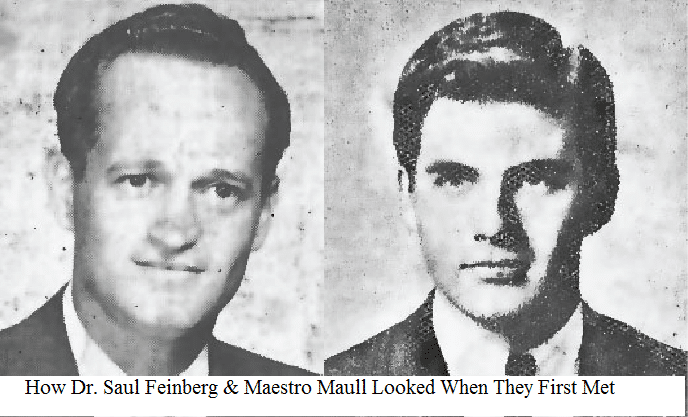 Last week I had the great pleasure of spending four hours with Dr. Saul Feinberg, my mentor, guru, high school piano teacher, and friend of fifty-three years. Saul is now 81. I am 65. Where did the time go?

It’s so easy is it to pick up the thread of our last conversation, we agreed that no matter how many months go by between our visits – it always seems as though it were yesterday! Over a leisurely lunch, we began to explore some of the many ideas that fascinate us and bind us together.

We once again marveled about the power of classical music, and music in general, to convey so much to the listener. We began to cite some of our favorite examples. Since just two days before I had taught a class on Jupiter from The Planets by Gustav Holst, I brought it up. Saul reminded me that he used to teach Jupiter as part of his Perceptive Listening Course. I knew that he had, although I’d never studied it with him. Somewhere along the way I’d seen the listening guide he created for Jupiter. I was sorry I had not brought along my own so that I could get his feedback. We both delighted in describing some of the really clever combinations of themes that Holst composed in this movement – each of us listening in our heads as we spoke.

I reminded him that I had never been an ‘official’ classroom student of his. As I explain in detail in my earlier blog post The Good News, I audited Saul’s classes for no credit during my lunch periods. Although 90% of the 5,000 students who attended Abraham Lincoln High in Philadelphia were required to take Dr. Feinberg’s classes – two forty-five minute periods a week for two years – the 500 of us in the choirs, bands and orchestras were exempt! I guess those responsible for determining the curriculum felt that learning to perform music was a sufficient musical exposure for us.

It was during those lunch periods that I observed him, the master teacher and musician – cajoling, taunting, teasing, and challenging his students to think creatively as he presented gaps in the information to fill – by listening! Truth be known, all of those exempted musical performers at Lincoln could have benefited from taking his listening course as well.

Inevitably, one of Saul’s favorite observations about music came up in our discussion – the invisibility of music. Music is unlike a painting or sculpture that we may look at and perhaps even touch. Music is also certainly unlike a television show or film in that respect as well. The sound waves are invisible – yet so filled with powerful feelings! Saul retold the story of how, while contemplating music’s invisibility, he came up with the idea for his Blueprints. He thought to himself: “Trained musicians and music students can, of course, read musical notation. And when they listen to music, many of them can see the corresponding musical notation in their mind’s eye. How can we create something for the non-musician, the non-music student, which will make music at least somewhat visible for them, and yet not add any extraneous images that might lead them away from the music itself? Whatever information is presented must keep the listener focused on the music.” Saul’s first Blueprint evolved from this query. As you may know, at The Discovery Orchestra we use the term Listening Guide to describe the lists of numbered musical events that I create for various compositions – based on Saul’s pioneering concept.

As time went on, Saul produced many Blueprints for movements and overtures from the standard orchestral repertoire. These were ultimately published in the 1960’s in four volumes entitled Blueprints for Musical Understanding. They are now out of print, and their copyrights have expired, but I am pleased to report that Saul has given us permission to post all of his Blueprints on our website. We shall have to create a special home for them. But in the meantime, why not follow one of his Blueprints we have already uploaded as you follow the YouTube performance that we have paired with it! I recommend the Finale to the Symphony No. 3 “Organ” by Saint-Saaens.

Our day ended back at Saul and Esther’s lovely home in Montgomery County, Pennsylvania. I was happy to be able to spend these moments with both of them. The late afternoon included the special treat of Saul playing one of his own piano compositions for me. I hope, when I am 81, that I will be able to play the piano half as well as Saul now does. Dr. Saul Feinberg – what a gift to the thousands of students he taught at Lincoln and to the field of music listener education!