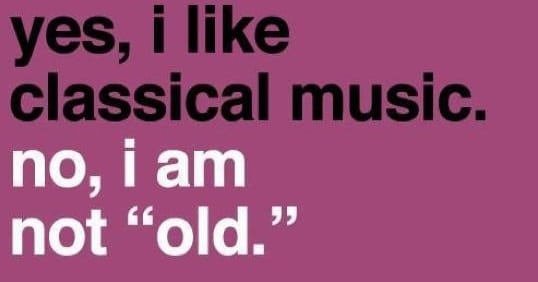 A recent search online connected me with an interesting 1984 article from the archives of The New York Times entitled, Education: Classical Music Not Their Thing. Gene I. Maeroff discusses a study conducted by the Association for Classical Music of New York, of the attitudes of 900 sixth grade and tenth grade students toward classical music in several cities around the country.

One Cincinnati, Ohio sixth grader summed it up this way, classical music “means long notes that are slow, and quite frankly boring.” A Jacksonville, Florida tenth grader made this humorous observation: “It is a type of music that a lot of people listen to so they can talk about how the younger generation will be deaf by 30.” And this surprisingly honest answer came from a sixth grade student in Shreveport, Louisiana: “I really don’t know if I like classical music because I haven’t taken the time to listen to it.”

If we have the courage, we might ask how attitudes toward classical music are now in 2018. . .quite possibly, worse. Quora is an Internet site that bills itself as “A place to share knowledge and better understand the world.” One can pose questions and await feedback. A 2017 querie was: “What percent of people listen to ‘classical’ music regularly?” That the question received only seven responses already speaks volumes, but answers ranged from a high of 10% to a low of 1% or less.

Exposure is, of course, the key. Students lucky enough to be in a school or district where classical music is emphasized may become devoted, regular listeners. In the past I have described the unbelievable results one highly skilled teacher can achieve. My mentor Saul Feinberg had an almost miraculous effect on the student body of Abraham Lincoln High School in Philadelphia, over the decades he taught there.

And when The Times article was written in 1984, the author may not have been aware of the founding of El Sistema in Venezuela back in 1975, let alone the worldwide music educational movement that ‘sleeping giant’ would inspire.

Gene Maeroff concludes the discussion with an inspiring reference to The Lincoln Center Institute, which like El Sistema, was also founded in 1975 and is still going strong. It has reached millions of students in New York since then. “The institute, an arm of Lincoln Center, offers summer workshops in which teachers – no more than 15 percent of whom are music teachers – are prepared to offer a series of lessons on particular classical music compositions. After the teachers return to their schools and teach the lessons, an ensemble is sent by the institute to perform the works.”

Mark Schubart, who in 1984 was director of the institute, said something which reflects the prevailing philosophy of The Discovery Orchestra: “If we develop a larger audience for classical music it is a dividend, but that is not the goal. You don’t teach kids to read in order to sell books. They learn to read and then decide what to read. It should be the same with music. We should create musical literacy so that they can make choices.”

This is precisely what Dr. Feinberg achieved with many thousands of Lincoln High students. And while no ‘once a semester or once a year visit’ to a school can be as effective as a four semester, two 45-minute classes per week course in music listening such as Saul’s, initiatives like those of The Lincoln Center Institute can have a far reaching impact. Likewise, The Discovery Orchestra, through the digital content we produce, has reached and affected the lives of millions of people.

Look to read more in the coming months about our latest television project. . .stay tuned. And while you’re at it, tune into our new radio program Inside Music on WWFM, The Classical Network on the 2nd and 4th Saturday evenings each month at 7:30 pm!