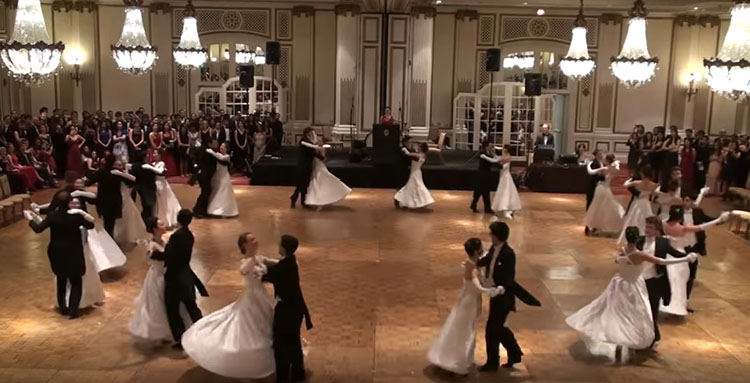 Maurice Ravel wrote the following words about his composition La valse, poÌ¬me chorÌographique pour orchestre: “Through whirling clouds, waltzing couples may be fairly distinguished. The clouds gradually scatter: one sees at letter A (GMM note: a specific spot in the score marked by this letter for rehearsal purposes) an immense hall peopled with a whirling crowd. The scene is gradually illuminated. The light of the chandeliers bursts forth at the fortissimo (very loud spot) letter B. (ditto) Set in an imperial court about 1885.”

One good ‘extra credit’ assignment for us might be – without the benefit of looking at the score – to see if we can figure out when these two events occur in the music. The first performance occurred in Paris in 1920. There has been much speculation about what this music means, some of which can be read along with other interesting information, if you wish, in the brief Wikipedia article on The Waltz.

But I have always just enjoyed being swept away by this music – both as a listener and as an orchestral musician on those occasions when I was privileged to play in the viola section in a professional performance.

What really ‘knocks my socks off’ about Ravel is his ability to orchestrate – that is to choose which instrument or group of instruments plays ‘what’ of the music one has written. That fantastic aptitude of Ravel to imagine in his ‘mind’s ear’ what it would sound like if the flute, for instance instead of the oboe, were to play a specific idea.

Now, in order for you to fully appreciate what I’ve just described, you must listen to this work (a 12-13 minute listen) first played on the piano – as Ravel would have done as a preliminary step in creating this score. Even though he envisioned the work – from its inception – as an orchestral composition, he would have created a piano version first. I give you the incomparable Yuja Wang in a performance at the 2008 Verbier Festival in Switzerland. Go full screen – sound up for maximum enjoyment.

Have you done the first part of you homework? Now. . .Listen to the Frankfurt Radio Symphony under Pablo Heras-Casado. Again, go full screen – sound up, and bask (no puns intended since he was born in the Basque region near the Spanish border) in Ravel’s incredible orchestration!