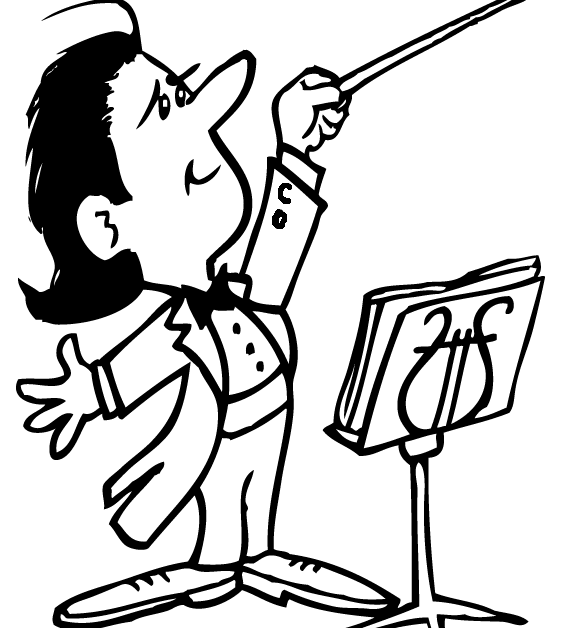 After my last, long rant on texting at symphonic concerts – I think it’s time to lighten up. Conductors notoriously take themselves too seriously. I guess it goes with the territory. But orchestral players have never been shy about putting conductors in their place. After all, as the saying goes: “The stick makes no sound” – which is not really true because the silent gestures we make on the podium do, in fact, influence the sound for better. . .or worse. But the point players are making is: “It is WE, the players, who actually produce the sounds, not that person waving the baton.”

How do professional orchestra musicians express their conductor humor? Well, first, there are the things they write in the parts they are playing from. If a conductor has a “tick” or a banal gesture repeatedly physically expressed, players have been known to make tally marks (IIII) in the parts during rehearsals. The same goes for keeping track of the number of times a conductor says the same unnecessary, inane remark.

When orchestral parts are rental material, one often finds a compendium of remarks that have accumulated in the parts over the course of performances by various orchestras around the world. I remember when I was playing in the viola section of one of the professional orchestras (name withheld to protect the guilty) I worked for over my playing career, a rented set of parts was on the stands that had just previously been used by the Chicago Symphony Orchestra. The music was a technically challenging contemporary work. One very difficult passage for the violas had the following message in the margin: “Fake it – Seiji Ozawa,” who had presided over the Chicago performances. My stand partner added in pencil: “Play EVERY NOTE!” – with the attribution to our music director who had just said that in rehearsal.

Then there are the jokes themselves. Some are vicious. When I moved to New York City in 1975, it wasn’t long before I heard the ‘New York Freelance Musician Conductor Joke’ – “What are three dead conductors floating facedown in the Hudson River? A start.” Then there is the light bulb joke that I’ve also heard attributed to sopranos. “How many conductors does it take to change a light bulb? Three. One to change the light bulb. One to pull the ladder out from under the one changing the light bulb, and one to criticize this entire performance.” Some are slightly off color. I will partially sanitize here. “What is the difference between a symphony orchestra and a bull? A bull has the horns in the front and the ass in the back.”

My all-time favorite conductor joke? This one speaks more than any other to the love-hate relationship players have with conductors as expressed in their desire to look at the conductor as little as possible. “Just before curtain time at the opera, the house manager peers out from the wings to see that there is no conductor on the podium. Quickly getting on the phone he says: ‘Are there any assistant conductors in the house?’ ‘Nope’ comes the reply. Desperate, the house manager shouts into the pit: ‘Anyone down there who could conduct Tosca tonight?’ One violist (another reason I love this joke) starts waving his bow yelling: ‘I know it from memory. I can do it!’ ‘Get on the podium’ barks the house manager. And so the violist conducts a brilliant performance of Puccini’s Tosca – from memory, as promised. The next night, the violist sits down in his chair in the pit, and his stand partner turns to him and says: ‘Where were you last night?'”

If this is not enough for you, feel free to visit this website: Things People Said – Eugene Ormandy Quotes. Here you will find a totally bizarre collection of things Maestro Ormandy said over the years of his long tenure in Philadelphia, as lovingly documented by the members of that esteemed orchestra.

Does it take a lot of chutzpah to stand in front of an assemblage of Juilliard, Curtis, Oberlin, etc. graduates – all highly trained, accomplished artists who each expect you to know EVERY line of the score as well as each of them knows their own single line? You bet it does. It also helps not to take yourself so seriously!