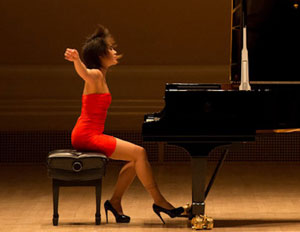 On Sunday December 7th I once again had the privilege of speaking before one of the Bank of America Series of classical music concerts at the New Jersey Performing Arts Center. I say ‘privilege’ because it really is one. Whenever one of us gets up in front of a group of concert attendees and shares our thoughts about some of the music to be performed, we have – in that instant – the rare opportunity to possibly shape people’s listening habits. . . not a moment to be entered into lightly.

On this particular occasion my talk preceded the sensational young pianist Yuja Wang. What I may or may not have said about Mily Balakirev’s Islamey that concluded her program is not what I wish to address here. Her spectacular playing made the audience crazed with excitement. They demanded encores and Ms. Wang gave them no less than six, including her own, insanely difficult arrangement of the Danse Boheme from Georges Bizet’s opera Carmen.

All the encores blew out my personal circuits, but it was the final one that took me over the edge for reasons I’d like to speak about. The entire Scene 1 of Igor Stravinsky’s ballet Petrushka has always ‘gotten me’ from the first time I encountered it as a teenager. The setting the music describes is the atmosphere surrounding the annual Shrovetide Fair occurring the day before Lent begins on Ash Wednesday. . . sort of like Mardi Gras – but set in St. Petersburg, Russia in 1830.

The music is so intoxicatingly thrilling (under earphones with the volume cranked up might be the only way to come even close to duplicating the thrill of listening to it live) . . .that it just send shivers through me. There is every imaginable thing going on at this street fair: all the adults and young children, the vendors hawking food and merchandise, an organ grinder and other street musicians, a very significant (for the plot) puppet show, even a trained dancing bear eventually appears in the ballet!

What it evokes in me is a feeling so powerful, from deep back into my own childhood that it might be described as a combination of uncontainable excitement, happiness and carefreeness. And I think by the time we get to the Danse Russe, performed by the three puppets that have been brought to life by a sort of evil magician, the tears always just uncontrollably stream down my face. Why? I don’t know for sure. I think it has something to do with mourning a part of me that died with the end of childhood – a state of being that is gone and can never be recaptured, except somehow in this music.

Yuja Wang’s sixth and final encore on Sunday was the Danse Russe. Watch her play it here in a performance at the Verbier Festival in Switzerland. She looks every bit a little girl as she plays this – taking such childlike delight in something so difficult to perform. But, of course, she zooms right past the technical challenges to the emotional content of the music itself. It will never cease to amaze me that a composer can capture such a sensation from childhood – turn it into abstract music, and then have a wonderful artist recreate those notes.