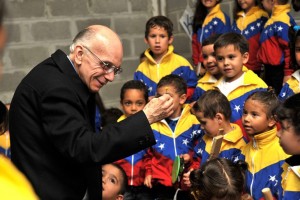 There is a significant ray of sunshine out there. Perhaps the biggest cause for hope regarding the future of classical music revolves around the efforts of one Jose Antonio Abreu, a Venezuelan musician and educator who died in March 2018, age 78.

Dr. Abreu’s brain-child, El Sistema, a publicly financed voluntary music education program founded in 1975 initially with just 11 students who practiced in an underground parking garage, now boasts more than 700,000 young people learning to play in orchestras or to sing in choirs. I repeat: more than 700,000 students. . .in Venezuela alone. Dr. Abreu’s primary concern was using music a means to create social change for Venezuela’s poorest youth, many living in the most challenging conditions – neighborhoods ravaged by drugs and gang-related violence.

“Music has to be recognized as an agent of social development, in the highest sense because it transmits the highest values – solidarity, harmony, mutual compassion. And it has the capacity to unite an entire community, and to express sublime feelings.” Jose Antonio Abreu

His vision and life’s work have created a small army of people – many now adults – who have been trained to perform and to love classical music at the deepest level. And El Sistema-inspired programs have sprung up around the world! It is truly a miraculous story that once again shows what incredibly positive results can flow from the dream of a single individual.

The movement is not without its skeptics, notably Geoffrey Baker, a British music professor and writer who, after spending research time in Venezuela, authored a highly critical book, El Sistema: Orchestrating Venezuela’s Youth (Oxford University Press, 2014).

However, I’ve personally had the privilege of presenting music listening interactions with the young members of the Paterson Music Project, a highly successful El Sistema-based program in New Jersey under the aegis of The Wharton Institute. We’re also pleased to have members of this program and their families attend our Discovery Concerts. From our perspective, this single example of El Sistema’s influence is only positive.

At age 70, I will not live to see the full effect of this movement let alone the 100th anniversary of its founding in 2075, but El Sistema’s very existence around the globe is the basis of my optimism for a future in which classical music continues to be performed and enjoyed by people the world over.

To learn more about this remarkable phenomenon I recommend two books: Changing Lives: Gustavo Dudamel, El Sistema and the Transformative Power of Music by Tricia Tunstall (W.W. Norton & Company 2012) and Playing for Their Lives: The Global El Sistema Movement for Social Change Through Music by Tricia Tunstall and Eric Booth (W.W. Norton & Company 2016).