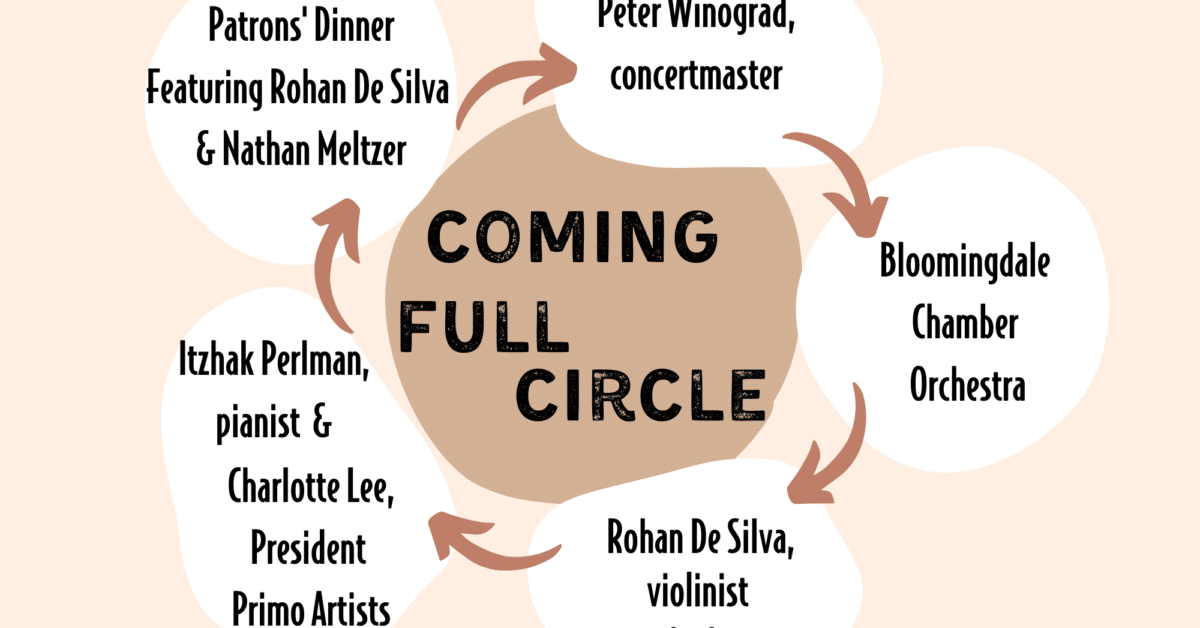 Some stories are worth telling… others not.  Then there are those we deem worth retelling!  I’ve told this one recently, and would like to share it again with you here.

Peter Winograd, The Discovery Orchestra’s concertmaster, and I have been good friends and colleagues for more years than either of us would probably care to admit.  When I was appointed music director of the Plainfield (NJ) Symphony in 1982, I was delighted to find Peter Winograd already there as the concertmaster.  Peter was still a Juilliard student at the time, and a wonderful leader of the string section who made my job on the podium considerably less stressful.

Another orchestra I was conducting, at the same time, was the Bloomingdale Chamber Orchestra in Manhattan. And I was very happy when Peter agreed to serve as the concertmaster of that ensemble as well.  On one occasion I knew that we would need some additional violinists. Peter immediately suggested I engage some of his classmates from The Juilliard School.  One of those violinists was Rohan De Silva, who subsequently played in the Bloomingdale Chamber Orchestra violin section on a number of occasions.  I had no idea Rohan was a piano performance major at Juilliard!  I only knew that he played the violin… and very well.

Fast forward twenty years to the early 2000’s when the New Jersey Performing Arts Center (NJPAC) engaged me to present the preconcert lectures for their classical series.  You can imagine my surprise when, prior to a lecture before a recital by famed violinist Itzhak Perlman at NJPAC, I scanned the brochure and saw that pianist Rohan De Silva would be accompanying maestro Perlman!   As it turned out, I learned that Rohan had been maestro Perlman’s regular accompanist in recitals… since 1999.

The circles continued to connect.  One of the concertmasters of the New Jersey Youth Symphony, which I conducted from its founding in 1979 until 1997, was a violinist named Charlotte Lee.  Charlotte went to music school after graduating high school, but upon completing her professional studies, decided that a career in music performance was not her strongest interest.  Rather, it was music management.  A force to be reckoned with, Charlotte landed a position as a senior vice president at one of them most prestigious classical music managements in New York City. For the next sixteen and a half years she personally managed the careers of no less than ten classical music superstars.  In 2015, Charlotte decided to launch her own music management firm, Primo Artists… taking with her violinists Itzhak Perlman and Joshua Bell.

When I asked Charlotte if she might suggest a young violinist to play at The Discovery Orchestra’s Annual Patron’s Dinner this past October 27th, she immediately said: “Let me talk to… Rohan De Silva.”  To which Rohan replied: “I’d love to play the piano in this performance for my old friend George, and I have just the violinist for the occasion – twenty-one-year-old Nathan Meltzer who studies with maestro Perlman at The Juilliard School.”   My head figuratively spun around as so many threads from the past instantly connected in one of those “coming full circle” experiences!