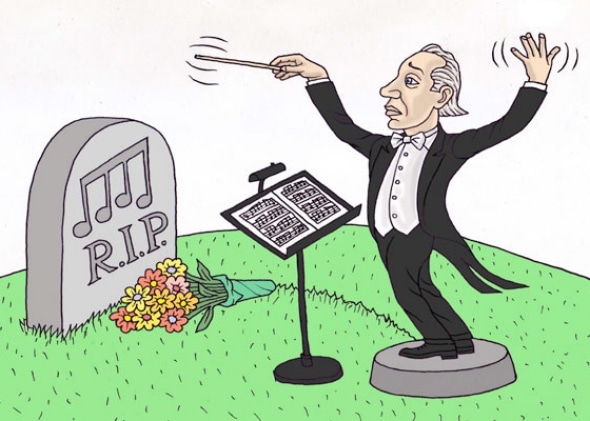 contributor Mark Vanhoenacker offered yet another in the unending series of obituaries for classical music on January 21, 2014, entitled Requiem – Classical Music in America is dead. Vanhoenacker quotes some disturbing statistics. “In 2013, total classical album sales actually rose by 5%, according to Nielsen. But that’s hardly a robust recovery from the 21% decline the previous year.” He cites the continued loss of classical music radio stations, but perhaps one of his most interesting paragraphs concerns Sirius XM, the satellite and online radio provider of which I’m a great fan.

Vanhoenacker notes that Sirius has “9 jazz channels, 20 Latino channels, and 8 Canada-themed channels – but only 2 traditional classical stations” (GMM note: Actually there are 3 classical music stations on Sirius if we count the Metropolitan Opera channel versus 62 non-classical music stations.). But the stat that really got my attention concerned one of Sirius’ two classical instrumental channels. “Symphony Hall has 3,500 Facebook likes.” Vanhoenacker notes that “Sirius’ all-Pearl Jam channel has 11,000: and their D.J. Tiesto-curated channel has 89,000.” Wow! Sirius’ classical music channel with perhaps the greatest national reach in the USA has only 3,500 Facebook fans. This actually makes me feel a little better about The Discovery Orchestra’s 683 Facebook fans as of this writing, since we have nowhere near the electronic presence of Sirius XM. But it seems likely to me that Symphony Hall’s 3,500 in some way reflects that the average classical music listener may have never ventured onto Facebook.

Later Vanhoenacker cites music critic, blogger and educator Greg Sandow. “. . .back in 1937, the median age at orchestra concerts in Los Angeles was 28. Think of that!” Yep, I’m thinkin’. That is astounding! He goes on. “In 1982 the median age of a classical concertgoer was 40; by 2008 it was 49.” Vanhoenacker also notes the dysfunctional “business model” of professional classical music and the decline of music education in our schools – topics I’ve addressed on other occasions in this blog.

But here’s the deal. The music itself – classical music – is not going anywhere. As long as there are copies of the composer’s notes to be interpreted by someone trained to read and perform them – classical music will continue to live. The very existence of El Sistema will alone ensure this, not to mention all of the recordings of past performances of classical music. These recordings will continue to exist in various digital formats, albeit archived in some electronic cloud. But we must consider the old saw: “Does a tree make a sound if it falls in the forest and there is no one there to hear it?” If no one wants to listen to the young musicians of El Sistema or the archived classical recordings. . .who cares? Vanhoenacker writes in his last paragraph – and sounding very much as though he is a closet classical music lover – “Myself, I cling to the forlorn hope that classical music has been down for so long, it must somehow be due for a comeback.”

Speaking for everyone at The Discovery Orchestra, we advocate for a first time ever–global shift in human behavior for perhaps 70% of America’s population. I realize I may have to wait for this to happen beyond the physical limitations of my own mortality. Ignoring current attempts to save the professional classical music “business model” – an effort, in my opinion, with about as much chance of success as saving the pay telephone had – what we at The Discovery Orchestra believe the real “crisis in classical music” is this. It is the absence of perceptive music listening as a consciously cultivated behavior in our society. Becoming better listeners in general would help so many aspects of American personal and civil life. From an aesthetic-personal growth standpoint, a widespread embrace of perceptive music listening would bring heightened personal pleasure to millions of individuals as they listen to music of all genres. . .classical, jazz, pop, rock – you name it.

Maestro Ma wrote: “Underneath the water is the life I’m leading, the thoughts I’m thinking and the emotions that well up in me. We all get into trouble if we think the universe only exists of the matter that we can see and measure, and not the anti-matter that is the counterpart that holds it all together.”

Yo-Yo Ma here underscores the essence of abstract music. I do not wish to denigrate the high value of song. I personally love countless songs. It’s just that for a high percentage of our population, song is the only genre of music that exists. If one asks a teenager if they would listen to a 5-minute movement from a piano sonata, they might likely comment: “Why? What good can it be? It has no words!”

Like Yo-Yo Ma’s unseen “anti-matter,” the powerful emotional communications of abstract, wordless music are invisible. Whether a movement from a Bach Unaccompanied Cello Suite or Angels on My Mind by jazz pianist Joe Sample (click “show more” and then click 49:12 by No.10) – these wordless musical expressions give us access to “the life I’m leading, the thoughts I’m thinking and the emotions that well up in me…underneath the water.” This is why it is so vitally important for us to become perceptive listeners who notice the myriad musical details of abstract music as its invisible sound waves penetrate us – and to encourage others to do likewise. At The Discovery Orchestra, we will persist in this endeavor!