“The following US orchestras will not start the new season. . .Atlanta, Minnesota, St. Paul Chamber Orchestra, Indianapolis, San Antonio.” What a headline! Of course, there is always the chance that labor negotiations will yield some progress and one or more of these ensembles will start their seasons on time. The extreme financial difficulties faced by these and a number of our country’s professional symphony orchestras are enough to turn the phrase ‘Classical Music Month’ into an oxymoron! 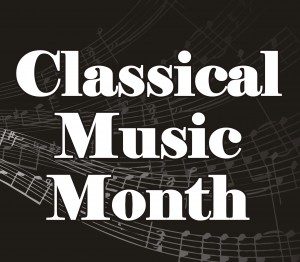 A better way to look at the situation, as noted in The Discovery Orchestra’s September 1, 2012 Facebook post, is the fact that the United States of America actually has an official Classical Music Month! One wonders whatever possessed President Clinton and the Congress to declare such a month back in 1994 and how this squares with sentiments currently being expressed by some politicians that we permanently de-fund National Public Radio, the Public Broadcasting System and the National Endowment for the Arts.

But. . .at The Discovery Orchestra we know why there is a Classical Music Month! And, if you are reading this blog post, I assume that you know, too. Just yesterday I was driving home, turned on the satellite radio, and found myself in mid-first movement of Mozart’s Sinfonia Concertante for violin, viola and orchestra. Had to pull over so I could make this music the sole focus of my attention! Moved to tears, I once again thought to myself when the music concluded: “How incredible that someone could compose abstract musical sounds – with no words and no visual images – in such a manner as to convey so much emotional power.”

And the only two keys required for unleashing all of this incredible emotional response within you? One – make a conscious decision to not just hear the music. Rather, give it your undivided attention, that is, listen to it. And Two – allow yourself to notice as much detail as you can. . .an ability you will find exponentially increasing over time. Want some help? Watch our weekly Discovery Orchestra Chats on YouTube or one of our DVD’s!

How about this idea? Commit to listening to 10-15 minutes of classical music each day for the remaining days of September. That might be just one movement of a symphony or sonata each day. Could be an entire Baroque concerto! You only have thousands and thousands of movements from which to choose (he said cheekily). So pick some favorites. Go to a live performance! And if you’re so inclined, keep a journal of how this music affects you. Then share some of your thoughts on our Facebook page or in response to this blog post.

In commemoration of the anniversary of the events of 9/11, I’d recommend the Adagio for Strings by American composer, Samuel Barber.