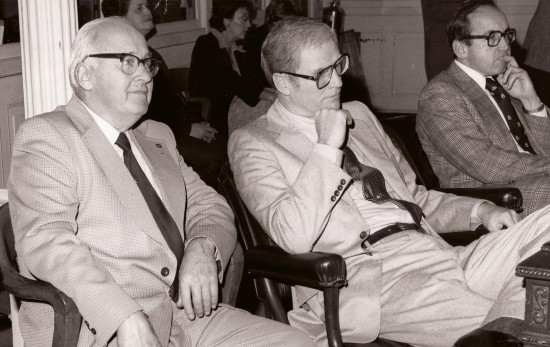 Taking a break from the usual serious nature of these ramblings, a few weeks ago a music listening student jogged my memory – emancipating a moment from my past, that heretofore lay frozen in memory.

First, some background information. Frederick Dunlap Maull, my dear dad, may he rest in peace, was an unusual person. Very generous of spirit, and with very little formal education, he made his living delivering heavy appliances and furniture for a major retailer. . .for 37 years before he retired!

When he got home each night around 7 pm, my brother Howard and I could always tell what sort of day he’d had. If his route had required him to drive down one of the narrow cobblestone streets of South Philadelphia or to lift, with his helper, a refrigerator up the three flights of stairs to a walk-up apartment, let alone take that refrigerator back down those same steps because the store had loaded the wrong color refrigerator on the delivery truck. . .let’s just say, he might not be in the best of moods.

But on most days, although quite tired from the sheer physical exertion of his job, he was in jovial mood. And he would always regale us with wonderful stories about the people he had met – the customers. This constant daily meeting of new people rendered him totally unafraid to begin conversing with perfect strangers. And this behavior spilled over into his life outside his work. And, perhaps due to an innate naivete, he was no respecter of position or social class. I had watched him walk up to congressmen, senators, mayors, governors, managers of stores – you name it – and say: “Hi! I’m Fred Maull.”

By 1979 he had retired. While serving that same year as assistant conductor of the New Jersey Symphony Orchestra, I conducted a concert in the State House in Trenton, New Jersey. It was late December, and I believe the NJSO had conceived this concert as a kind of holiday gift to the legislators and the governor. I had programmed light musical fare that had Christmas ‘overtones’ – works such as Vaughan Williams’ Fantasia on Greensleeves (arranged by Ralph Greaves) that sounds, of course, like the carol What Child Is This?

I casually mentioned to my dad that I would be conducting in Trenton – not really thinking through the fact that he might drive up from Philadelphia. So I had not even thought to alert the security detail at the State House that Fred Maull could be attending, without prior clearance.

As I turned around to take my first bow with the members of the NJSO standing behind me. . .I’m sure my eyeballs registered surprise, shock and a bit of embarrassment as I saw my dad, sitting right next to Governor Brendan Byrne, with his finger pointing and his lips distinctly mouthing the words: “That’s my son!”

When Mrs. Byrne introduced herself to me at our recent listening course – it all came flooding back.