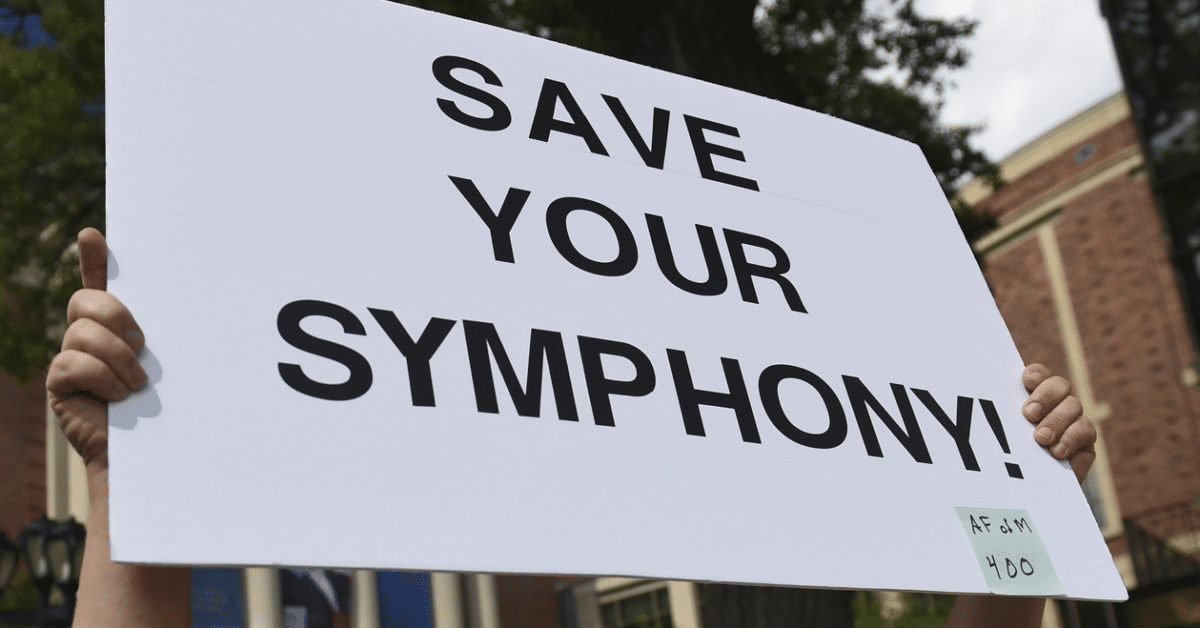 As a member of the American Federation of Musicians, the national musician’s union, I receive regular email and snail mail communications from the Federation. Today’s email was disheartening but not a surprise.

“Despite strong ticket sales and great reviews, Fort Worth Symphony Orchestra musicians are being asked to take an almost 9% pay cut by management. Fort Worth musicians, AFM Local 72-147 members, have been fighting for a fair contract since June. The musicians took a significant pay cut five years ago to help the symphony recover from the recession. Management now wants to cut their salaries even more, making it a cumulative 23% cut with inflation since 2010.”

It is very difficult for anyone, regardless of the specific expertise they might have, to be told that one’s talents and endeavors are no longer valued or, at least, not as valued as they once were. Professional classical musicians, especially the members of our nation’s professional symphony orchestras, have been receiving such messages with increasing frequency.

If the number of individuals willing to fill that 70% hole in your orchestra’s annual budget decreases, something has to give! The management will tell the musicians, like those of the Fort Worth Symphony Orchestra, that they must work for less. Laying aside how it feels to be told you’re worth less, how does one in this situation handle the practical issue of meeting personal current financial obligations – your children’s college tuitions, mortgage payments and the like? If things are really dire, of course, the Board and management may cut the number of performances or, in a really drastic measure, ask for Chapter 11 protection, or just close the doors.

Even major orchestras, such as The Philadelphia Orchestra – the beloved institution I grew up listening to and one of the finest orchestras in the world – only emerged from Chapter 11 protection three years ago. And yet, I have heard, that after decades of offering the players three-year contracts, there is a possibility the players will be offered only a one-year contract in upcoming labor negotiations. Such rumors don’t bode well for the financial health of that orchestra.

But – we can’t be angry with our donors! After all, sadly some of them pass on; some move away; some reprioritize their philanthropic giving. Supporting cancer research may become more important to a donor than supporting the local orchestra. But a deeper, more systemic problem for professional classical music in America is that the number of philanthropically inclined individuals who wish to support this art form definitely appears to be declining. It’s not just “the recession” as is apparent in the reports from Fort Worth and Philadelphia.

Knowing all this, as I sat at the New Jersey Performing Arts Center this past Saturday – listening to an extraordinary, moving and brilliant performance by the London Symphony Orchestra under conductor Valerie Gergiev – I could not help but wonder: “How long will we be able to be so moved – in live performances – by such magnificent ensembles?”