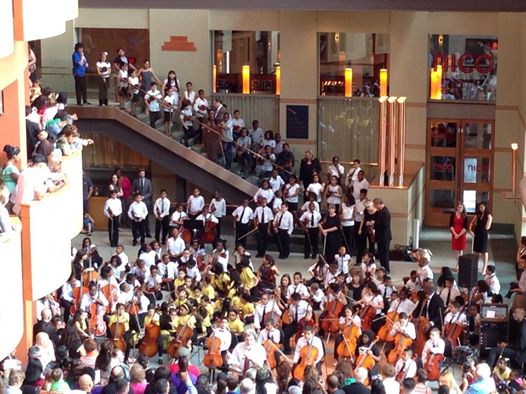 This is what it looked like on Saturday June 7, 2014 as the first ever concert of El Sistema New Jersey took place in the lobby of the New Jersey Performing Arts Center (NJPAC). And what an event it was on many accounts.

El Sistema is the Venezuelan educational program founded in 1975 – the brainchild of Jose Antonio Abreu – which dramatically alters the lives of children socially and musically. Providentially, it is sweeping the world, with new El Sistema-based programs popping up like weeds, almost every time you blink your eyes in 56 countries around the world.

In New Jersey we have five known programs. I say ‘known’ because there may be others hiding in the woodwork or one that may have come into existence while I was writing these sentences. I realize that I am being overly dramatic, but the pace of growth worldwide is truly amazing.

Saturday’s concert, hosted by the New Jersey Symphony Orchestra (NJSO), was very special not only for the musical performances, but also because this was the first time that New Jersey’s five current programs were represented together in a program. This was all made possible through the diligent work of author and music educator Tricia Tunstall who commented that the afternoon also marked the first time that any state’s El Sistema-based programs – in all of the United States – had ever staged a joint concert. New Jersey was the first. . .and she should know!

Tricia Tunstall’s landmark book on the growth of El Sistema: Changing Lives: Gustavo Dudamel, El Sistema, and the Transformative Power of Music (W.W. Norton & Company) chronicles this incredible phenomenon. Tricia and Eric Booth are currently at work writing a second book on the worldwide spread of El Sistema. Eric, an actor, educator, consultant and a leading authority on El Sistema, was also on hand as MC of the concert proceedings.

Sadly, the 400 girls of the choir could not be present, but were represented by staff. The 400 girls! Who knew? Another NJSO educational outreach activity, the NJSO Early Strings Program, a Suzuki ensemble based in Newark, was also on hand. Each group played their own selections. I must say that the young musicians of the Paterson Music Project å_å_- with which The Discovery Orchestra also has a teaching relationship – absolutely brought the house down with their rendition of Twinkle Tango. I was so proud of them!

The brief program concluded with a grand finale, a joint performance by all the assembled musicians – and the audience, singing the lyrics provided in the program – of a special number written just for the occasion by performer and composer David Rimelis: Three Little Birds Ode to Joy. The audience, cheering from the floor and the balconies in Spanish and English, went wild!

And at The Discovery Orchestra we’re wild about the fact that David Rimelis will be bringing his eclectic mix of country fiddle music to our final in-home concert of the 2014-15 season, and that author Tricia Tunstall will be joining our Board of Trustees.