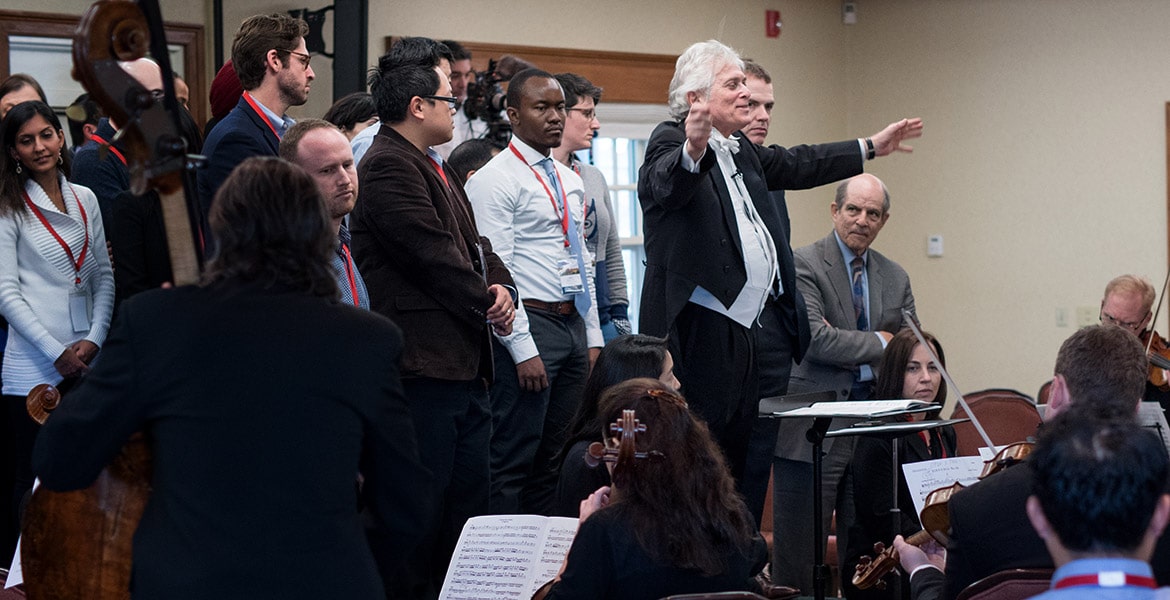 Roger Nierenberg, a good friend and colleague of mine for forty-four years, created The Music Paradigm. The Music Paradigm presents a unique way for executives of corporations to find out what they might learn from the inner workings of a symphony orchestra.  And just how much might that be?  As it turns out… a great deal.

I encourage you to visit the website of The Music Paradigm to learn more about this remarkable organization.  In brief, Roger has travelled the globe conducting two-hour sessions with leading corporations. We’re talking Fortune 500 companies here as well as less familiar ones.

At the appointed hour, executives are escorted into a large meeting space in a hotel or country club. As they arrive, many individuals are amused or even a little intimidated to learn that they are about to be seated around the edges of and within a full symphony orchestra.  The players are all dressed in formal attire, instruments in hand.  Roger graciously invites the timid to sit down near the first violin section or right next to the trombones or the percussion section.

The musicians engaged to perform in the Music Paradigm are locally contracted from a pool of professional symphony players who live in that community.  Roger does not know nor has he ever before worked with any of these musicians. This factor greatly adds to the spontaneity and authenticity of the proceedings. Neither the audience nor the players have any idea what Roger may ask them to do as the interaction unfolds.

A short symphonic selection is performed without comment and receives polite applause. Roger might off-handedly remark at this juncture: “It’s OK to applaud whenever you wish.”  Then the fun begins. After speaking briefly about issues confronting the host organization, as transmitted in advance to Roger by the corporation’s CEO, Roger humorously proceeds to help the audience understand how unbelievably lucky they are to be sitting inside a professional symphony orchestra on this occasion.

He will ask them to observe the orchestra at work, and challenge them to notice how much they can ‘steal’ from the symphony orchestra in the form of useful organizational and managerial best practices. Roger, microphone in hand, frequently exits the podium and walks into the audience asking questions and receiving responses – amplified so that all can hear. At times, some eager as well as reluctant participants are brought up onto the podium for a ‘conductor’s eye and ear view” of the scene. Two hours later, a room full of managers, directors, board members and other executives are on their feet vigorously applauding and shouting their approval of all that has transpired following a ‘final’ complete performance by Roger and the orchestra of the featured classical music selection.

Many will have learned to listen in a completely new way.  They will have observed first-hand the high level of competence to which professional musicians hold themselves accountable. They will have personally experienced how the individual sections of the orchestra function with or without each other’s help, much like the self-insulated silos of the corporate world.  Executives will viscerally understand what it feels like to be an employee who receives too much information, or not enough. They will personally see the limitations of power and control that a conductor can exert.  A great way to get of taste of The Music Paradigm and Roger at work is to watch this nine-minute segment from a past episode of the PBS News Hour.

It has been a long time since Roger and I met each other as fellow contestants in the 1976 Baltimore Symphony Orchestra’s Young Conductors’ Competition. Neither of us won the competition, but each of us has since fashioned our own individual career paths.  It’s interesting to note that we’ve both been motivated to help more people find an emotional connection to classical music over the past twenty-five years.  Roger created The Music Paradigm in 1995.  I conducted my first Discovery Concert in 1996.  Neither of us were aware of each other’s activities at the time.

Why am I sharing the story of my friend Roger Nierenberg today?  Just before the world turned upside down, Roger was unable to present a Music Paradigm session for FirstHealth of the Carolinas, a large healthcare network, at the Pinehurst Resort on March 3, 2020.  Roger, having become aware of my work with The Discovery Orchestra, asked me to fill in for him.  Pleased, though slightly apprehensive about being out of my Discovery Orchestra comfort zone and reluctant to travel by air on news of the viral pandemic, I nevertheless agreed.  And I’m so glad that I did.

In presenting this event, I did not want to stray far from Roger’s model, and so endeavored to be ‘Roger’ for the evening – a total impossibility.  I could not help but be myself, but I greatly enjoyed the experience and I believe that the good people at FirstHealth of the Carolinas did as well.  Truth be known, I may have learned a lot more that March evening than they did.

Can Technology Save Classical Music?