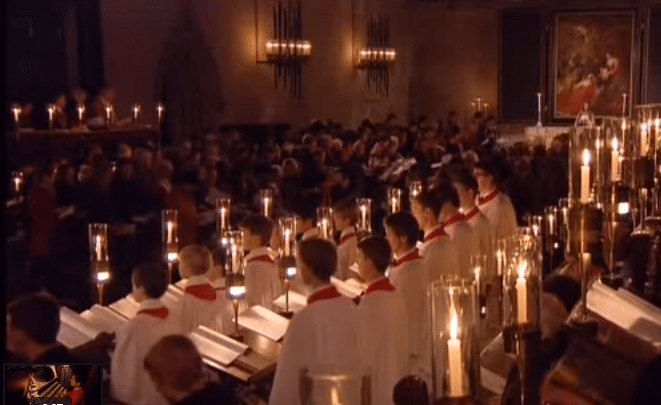 “But you can’t take the choir school out of the choir boy.” As I noted in my very first blog Opening Chord, I attended St. Peter’s Choir School in Philadelphia from fourth through seventh grade. Although that was a very long time ago – fifty-nine years to be exact – those four years changed my life forever. It was at St. Peter’s that I became a musical ‘performer’ – a proud member of a highly disciplined, well-respected choir of men and boys that sang two services every Sunday at St. Peter’s Episcopal Church, at 3rd and Pine Streets, from September until mid-June, as well as performances in other venues such as the Philadelphia Academy of Music.

The musical demands for special occasions in the church year were ‘over the top’ to say the least, and it’s Christmas that is currently firing off all sorts nearly sixty-year-old memories in my head. I’d like to share a favorite.

The Christmas carol Hark the Herald Angels Sing is rich in its origins. The text was written in 1739 by Charles Wesley with help from friends. In 1855, British musician William H. Cummings set the text to a melody he borrowed from Felix Mendelssohn. Cummings created his own harmonization, and thereby gave us the version we all know so well. In the 1950’s the late Sir David Willcocks, who died only this past September 2015, wrote a descant to be sung over the third and final verse. Other descants for this carol had been written, but this was destined to become the favorite.

A descant, for those of you who are not choral singers, is a separate, independent melody sung by the soprano voices above the main melody. This works to best musical effect when the main melody is sung in unison – that is, with no harmony – by the altos, tenors and basses below the descant.

This Willcocks descant has a number of thrilling moments of musical ‘text painting.’ The words “Born to raise the sons of earth” have the sopranos sing a high note on the word ‘raise.’ But the moment of greatest emotional intensity, ‘the point’ as Rachmaninoff would say – or perhaps I should say the moment that always ‘gets’ this old choirboy – occurs the last time the words “Hark the herald angels” are sung. Willcocks has the sopranos sing a note just one-half step above the main melody on the first syllable of the word ‘herald,’ creating a very brief. . .effective, beautiful dissonance.

But you don’t have to take my word for it thanks to the magic of the Internet and YouTube. First, familiarize yourself with the descant by clicking this link. Go ahead, play it several times! If you like, sing or hum the main melody under the descant.

Now listen to the men and boys choir of King’s College, Cambridge, England, where Willcocks served as organist and choirmaster from 1957 to 1974, sing this carol. Notice that in this rendition, brass and organ are used for accompaniment. Notice also that the first verse is sung in unison. There is no harmony being sung. The harmony is being played by the organ and the brass, but the sopranos, altos, tenors and basses are all singing the main melody. The second verse is sung in Mr. Cumming’s four-part harmonization of Mendelssohn’s melody – except for the very last “Glory to the newborn King” which is in unison. The entire third verse is sung in unison by the altos, tenors and basses while the sopranos sing the descant. Listen for the subtle but devastating ‘point’ under the last ‘her-ald.’

Finally, and this is strictly optional, is you want to literally see the visions that this music evokes in George Marriner Maull’s head, click on this link for a slightly different version, again sung by the choir of King’s College. Go full screen, crank up the volume! See and feel what it’s like to be an Anglican choirboy. And, of course, Merry Christmas!