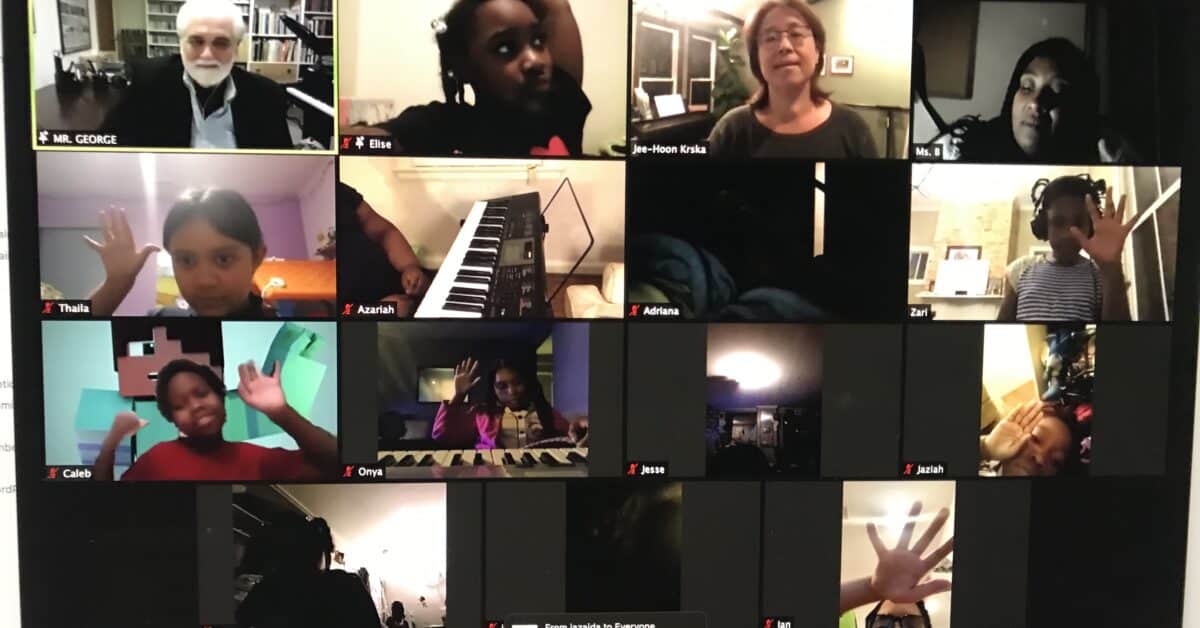 We know that Noah brought the animals on board the ark two by two, but at The Discovery Orchestra we had something else in mind on October 29th. In collaboration with Keys 2 Success (K2S), a wonderful “not-for-profit founded in 2016 to provide music education to children in public elementary school and project housing in Newark” under the leadership of Dr. Jee-Hoon Krska, I presented a zoom webinar.

Because it was my first zoom webinar, I was frankly nervous. It was sort of like having my first haircut, or my first day in kindergarten as a child.  I didn’t know what to expect having never before given one of my music listening interactions live over the Internet.  Thankfully, I was in the good hands of Dr. Krska, who not only talked me through the process beforehand, but also ably performed as “studio engineer” extraordinaire the day of the event.

Dr. Krska, Discovery Orchestra Executive Director Virginia Johnston and I had hoped to do a listening session with the students of Keys 2 Success last spring, but the pandemic intervened and scuttled those plans.  The repertoire we discussed at that initial meeting was Carnival of the Animals by French composer Camille Saint-Saëns.   We’d all agreed that the visual images created by this music were perfect for the occasion.  All we had to do was figure out how to do this under the circumstances now affecting all ‘live performances.’

Once again,  Dr. Krska to the rescue.  Keys 2 Success had already created several virtual events over the Internet during the summer.  They were ‘past masters’ of this technology.  All I had to do was create a video in my home studio on my computer that fused the music with images of the animals portrayed.  Well… easier said than done.  But like so many others, I was presented by the pandemic with an opportunity to master some new skills.

I’d never before used the GarageBand or iMovie applications on my iMac, but I grit my teeth and began experimenting.  After creating the initial video, I sent it to Dr. Krska and we discussed how it would be used.  First there would be introductions of me to the students and vice versa. Then, some of the students would play keyboard selections for me and for Virginia Johnston who would also attend.  We would be asked to do what we would later ask the students to do… namely, describe what the music suggests or is about.

When the day came, Dr. Krska and I realized we’d never get through the entire Saint-Saëns in one session –  we’d have to take “five animals at a time.”   In my video, I included the animal Saint-Saëns intended to musically portray along with three or four ‘incorrect’ choices.  The Keys 2 Success students were asked in a zoom poll to vote for the animal they felt was the best choice and to be prepared to tell us why. This worked like a charm!  What fun we had!  And we’ll continue this with another session in the New Year.

Life is full of surprises.  At the initial planning session, Dr. Krska brought along a newspaper clipping and a program from a performance I had conducted in the early 1980’s which featured Dr. Krska and her twin sister when they were young girls (!) playing Mozart’s Concerto for Two Pianos.  Even though I’d met Dr. Krska before… 73-year-old Maestro Maull did not make the connection between the young Jee-Hoon Yap and the now married with children of her own Dr. Jee-Hoon Krska!

How ‘Ya Gonna Keep ‘Em Down On The Farm