How ‘Ya Gonna Keep ‘Em Down On The Farm 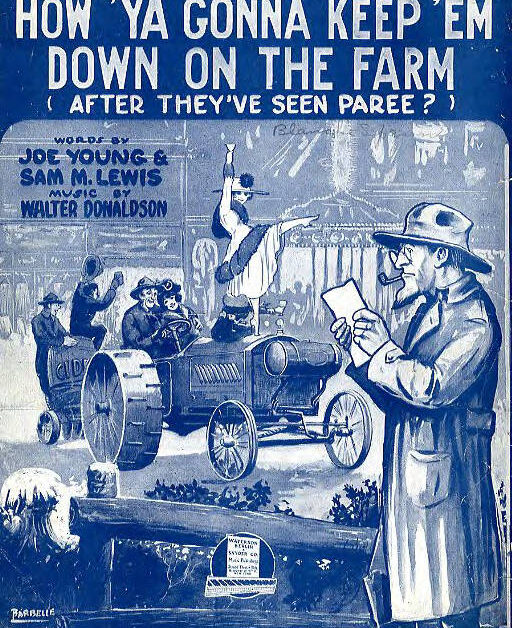 (After They’ve Seen Paree?)…as the 1919 WWI song written by lyricist Joe Young and composers Sam M. Lewis and Walter Donaldson so ably asks. The problem, however, for classical music artists and ensembles is actually reversed. How do we get the troops (the 90%+ of the population who never travel there) to visit Paris (classical music) in the first place?

At The Discovery Orchestra we have a pretty good track record of affecting and even changing the lives of those individuals…we get our clutches on.  If someone accidentally catches one of our public television shows, radio broadcasts, YouTube videos or wanders into one of our live events, our surveys demonstrate that most of the people, eighty-five-plus percent of them, have a favorable and in some cases life-altering reaction.

It doesn’t matter if they’ve loved classical music their entire lives or hated it.  Most seem to come away changed in some measure.  A recent case in point…I facilitated a listening interaction last week on the Finale of the Symphony No. 3 (Organ) by Camille Saint-Saëns to a group of adults, most of whom had never been subjected to our “discovery process.”  Some of them were devout classical listeners. Many of them had at least a casual relationship with this art form.

The one who got my attention though was someone I met after the lecture. A gentleman in the audience excitedly approached me and said: “I love classical music, but my wife does not.  She has never gone to a concert with me in all the years we’ve been married.  But you converted her this evening!”  The gentleman’s wife then walked up and chimed in: “Yes, I want to go to a concert now.”

Comments like that make my day, week and sometimes month.  However, I return to my original premise.  How do we get people in the door that have never ventured in?  Well, I’m happy to report that some prestigious musical artists and organizations are working on this!

One of our trustees brought to our attention a September 14, 2019 article by Charles Passy appearing in The Wall Street Journal . Finally, as detailed in this article, The New York Philharmonic, an organization with the financial resources to ‘do it up right’, is going full throttle into social media in order to lure millennials into the concert hall.   Let’s face it…many people now live on their electronic platforms.  This might change someday, but it seems unlikely.  We must reach people where they live, which is why The Discovery Orchestra’s most recent strategic plan places such great emphasis on our electronic media projects…our new production for American Public Television, Discover The Firebird, to be released nationally in May 2020, and our bi-monthly radio broadcasts, Inside Music, for WWFM, The Classical Network.

Another shining light on the horizon is Clemency Burton-Hill, Creative Director at WQXR FM in New York City.  In her October 8, 2019 article for The Guardian entitled We Need To Get Emotional About Classical Music, she reveals some very personal things about how classical music has helped her get through some very difficult times. I recommend this article to you.

“I devised my own ritual that involved listening, really listening (emphasis mine), to a classical track for a few minutes a day.  Somehow, once again, a space was created in which I could not only process difficult feelings but get around and through them. The effect felt disproportionate, miraculous.  In retrospect, it probably shouldn’t have been a surprise that classical music could be such a powerful ally.”

“We need to get emotional about classical music.” Indeed! Emotional, visceral! At The Discovery Orchestra we could not agree more.  And with Saul Feinberg, my mentor, we believe: “The more we perceive, the more we receive.”  When we decide to be in the listening state of complete presence with music we begin to notice more and more, and our emotional response is transformed.  And, hopefully, we won’t need to worry about ‘keepin’ ‘em down on the farm,’ because Paris (classical music) will sound and feel so good…who wouldn’t want to repeat this experience – and often?

The Emotional Space. . .That Music Can Provide