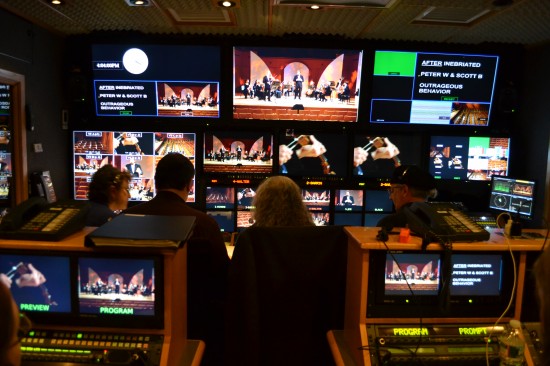 Beyond what is perceived as the glamour of television and film is a process best reserved for those who are not, as they say, the “faint of heart.” I speak of editing. There is a certain tedium to looking at footage over and over and over again. In our television productions, for me personally, this also entails listening over and over again to the show’s musical audio sound track. Luckily I am spared the initial go round in each case.

Multi-camera shoots obviously provide many different shots of the same moment in time of the production. Our associate director and offline editor, Janet Shapiro of Brandenburg Productions (https://www.brandenburgproductions.com/), provides me with a rough cut in which she has already discarded many camera shots that just won’t work. I can watch this material at home on my own computer. And David Walters, our audio engineer (https://www.davidwalters.com/), creates an initial audio master for me to listen to at home as well.

Then the fun begins! As Wikipedia notes, “Offline editing is the part of the post-production process of filmmaking and television production in which raw footage is copied and edited, without affecting the original film stock or video tape. Once the project has been completely offline edited, the original media is assembled in the online editing stage.”

Offline sessions at Brandenburg Productions with Janet and our director Jeff Friedman are lively and animated, rarely edgy, and frequently humorous. But whatever the atmosphere, one goal is always foremost in our minds – to create the best possible show.

There are vanity aspects. “I can’t stand that shot of me! It’s got to go,” says George. When the audience is featured in a shot, we must watch those few seconds many times to make certain there are no “yawners” or “sleepers” that we missed spotting on earlier passes. I mean – we’re not going to broadcast a great big yawn to millions of public television viewers. Right? Certain audience members might even acquire humorous nicknames during this process! Same goes for orchestra members who may be scratching their noses! All of this process takes many hours.

Finally we get to sit down with Dave Emmerling, online editor, at Midnight Media (https://mmgi.tv/). Here is where “the rubber meets the road.” Final magical edits take place at this time. A desired hand-held camera shot that has a tiny bit of unwanted motion in it can be corrected by computer wizardry. These moments amaze! Syncing the musical track to the visual images is trickier than one might suppose. “Doesn’t it just automatically sync up?” In a word – no! This process could try the patience of world’s leading guru on relaxation.

Glamorous? Probably not the word any of us would choose to describe the editing process. But, oh, how satisfying the final product is!