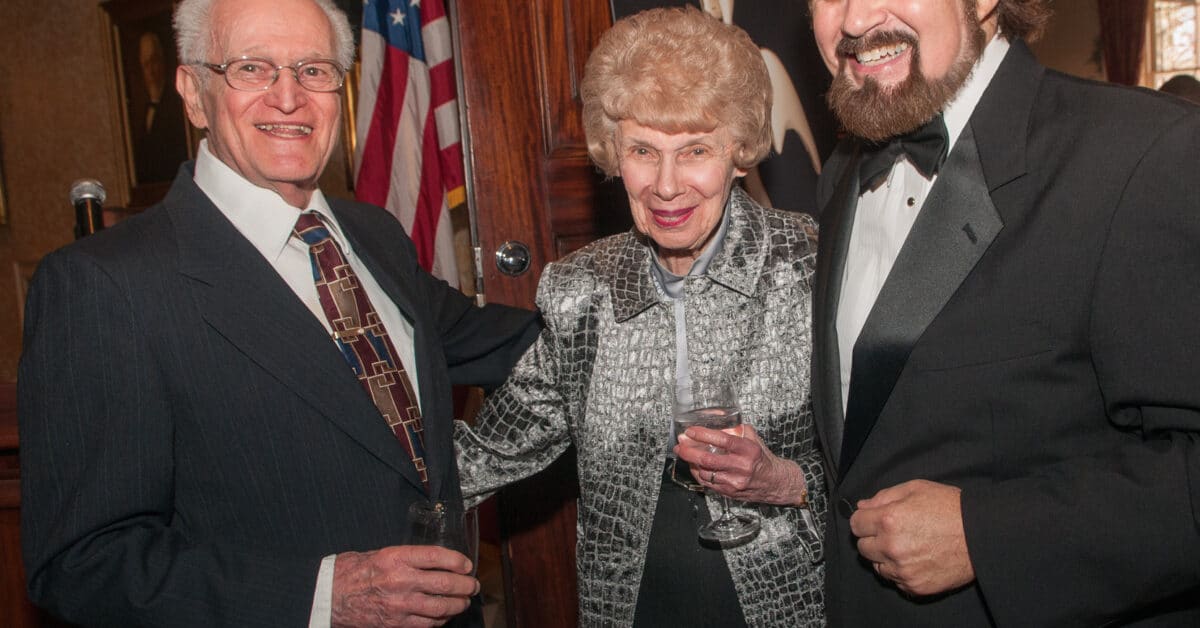 Not long after our recent gala during which The Discovery Orchestra honored my longtime friend and mentor Dr. Saul Feinberg, I happily accepted an invitation from Saul and his wife Esther to visit them at their home in Pennsylvania. While there I was given a copy of an article by Saul that was published by the Pennsylvania Music Educators Association in May 1983: Experiencing the Power of Music Through Listening. With Saul’s permission, I will quote from this succinct expression of his life’s work.

“How enlightening and penetrating the music listening experience can be for all is eloquently described by Frank D’Andrea in a 1963 article for the Music Educator’s Journal. ‘A great work of musical art embodies a view of life; it gives form to some of our highest moments of awareness. . .Penetration into an art work is entrance into the secret ideal, imaginative world of creation out of which it arose. Here the listener is carried to a height of awareness, knowing and feeling which only the aesthetic experience can provide.'”

“Riccardo Muti, music director of the Philadelphia Orchestra (now of the Chicago Symphony Orchestra), in a recent editorial in The Philadelphia Inquirer, responding to curricular changes proposed by the Pennsylvania Board of Education and the adverse effects they could have on music and art offerings in the schools, Muti said: ‘Music is more than a hobby, an entertainment or pastime for the elite. It is part of the soul of every human being. Music speaks to us in a way that words cannot, to our feelings as well as our thoughts.'”

“Although D’Andrea’s and Muti’s views on ‘what music listening can do’ would probably by acceptable to most music educators, the question of how music listening should be taught so that it can do ‘what it can do’ is not so easily answered. The reason for this may lie in the paradoxical nature of aesthetic listening itself. For if one is to get from music all that listening can make possible, two seemingly incompatible demands must first be satisfied.”

“One is the need for the listener to listen long enough and deep enough to the ‘whole’ so that the full intent of the music may be felt and known. The other, however, is the need to encourage the listener to concentrate upon the smaller ‘wholes’ of the composition so that his or her perceptive abilities become sharp enough and strong enough to deal more penetratingly with the complete work.”

“If the significance of a listening experience is dependent upon the extent to which these two antithetically related processes are realized, then certainly some means for bringing about such a synthesis should be sought after and used. The result of this has been my development of an approach to listening that involves a creative problem-solving method and a series of perceptive music listening guides called ‘musical blueprints.'”

“Blueprints are step-by-step visualizations of a complete movement of music which enables the listener to focus upon the significant expressive qualities of the music being studied. It is not necessary to include everything but rather those tonal, rhythmic, and structural ingredients which contribute to a more heightened experience when listening to a complete work.”

“Various musical ideas can be ‘blueprinted’ – melodic, rhythmic, harmonic, timbre, dynamic and structural concepts, as well as basic aesthetic qualities such as ‘tension-release’ and ‘unity and variety.’ Open-ended questions to answer and ‘incomplete’ graphic representations offer the listener an opportunity to speculate what the composer might do with his musical ideas. This can be a very revealing and enlightening experience for the listener.”

“What ‘listening guides’ are supposed to do is precisely what was indicated earlier – to serve as aids in helping listeners respond more perceptively and openly to both the small and large ‘wholes’ of the musical work. And once listeners become ‘hooked’ on ‘what music listening can do’. . .”

Well – you can easily see where Saul is going from there, as well the ‘egg’ from which George Marriner Maull hatched! Can you imagine what might happen to the United States if, say, 70% of our population became ‘hooked’ on ‘what music listening can do?’ That was the percentage of Saul’s students at Abraham Lincoln High School in Philadelphia who, as verified by Saul’s anonymous survey results, would annually become ‘hooked’ on classical music listening as result of being subjected to this process twice a week.

Discovery Orchestra Chat 93 – What in the World