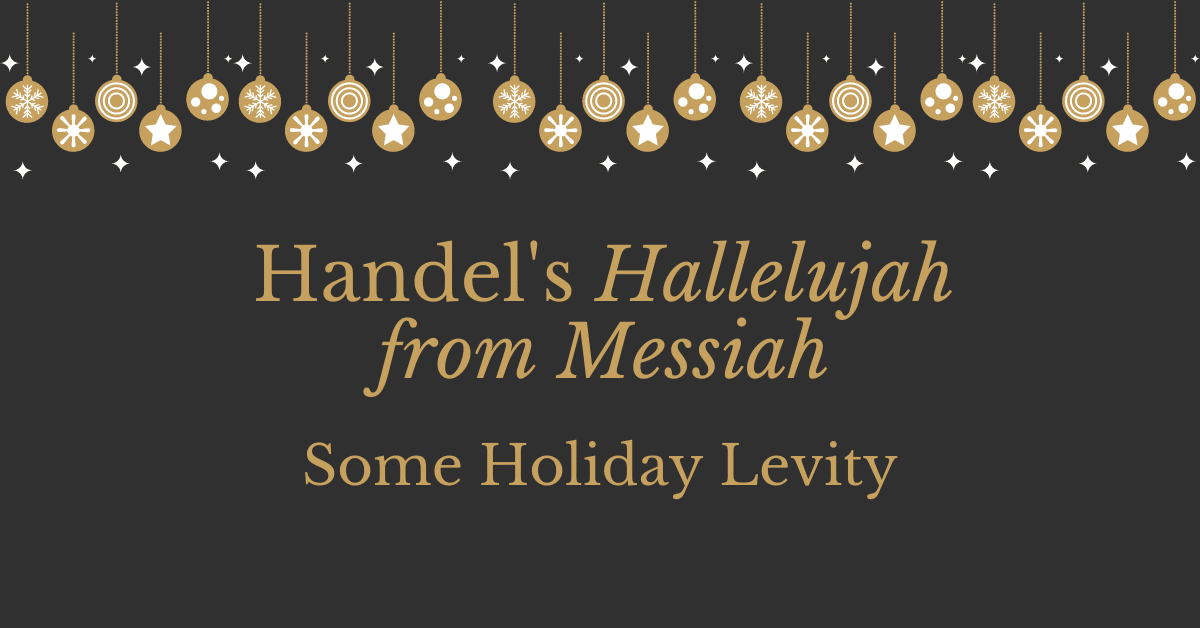 Have you ever sung Messiah – a portion of it, or just Hallelujah?  I remember the first time I did.  I was scared out of my mind.

The choir of men and boys of St. Peter’s Episcopal Church in Philadelphia had a considerable musical reputation in town, as well as beyond the city’s borders.  All the men in the choir were graduates of St. Peter’s Choir School where I, as a nine-year-old, now found myself a student.  That holiday season of 1956, the choir sang Part I, the “Christmas Portion” of Messiah with Hallelujah tagged on at the end for good measureat the Philadelphia Academy of Music, the city’s premiere concert venue, with members of The Philadelphia Orchestra.  Why was I scared out my mind?   The choirmaster and headmaster of the school, Harold Wells Gilbert, was a fabulous musician and a strict disciplinarian whose icy, penetrating glance could make a choirboy’s entire body freeze in place.  Dr. Gilbert had been in this post for forty-two years before I was enrolled at the school.

We were all petrified of making mistakes.  Actually, there was a system in place to prevent musical misdeeds from happening.  New choirboys were assigned a “teacher,” an older student who sat next to them in rehearsals each day after academic classes had concluded. This “teacher” was allowed to “tap” you on your thigh every time you made an error while singing.  Some “teachers,” shall we say, were harsher than others.  Of course, today none of this would be tolerated.  Dr. Gilbert might have been taken to court for encouraging child abuse.  But one thing was for sure, it did not take very long for a new chorister to learn not to make mistakes.

Now to the humorous part… if you’ve ever sung Hallelujah, you know that the third, fourth and fifth measures of music before the end are some of the scariest in music from a chorister’s point of view.  Why?   As we arrive at these measures, Handel has been rocking back and forth on a plagel cadence (in your mind hear “Amen” at the end of a hymn).  The sheer repetition of moving from a “IV chord” to a “I chord” intentionally builds emotional tension for the listeners, but also sets the trap.

Handel changes the text as another set of four cadences are sung on the words “Hallelujah, Hallelujah, Hallelujah, Hallelujah!”  And then… he inserts a huge silence or rest for everyone – chorus and orchestra – before the word “Hallelujah” is sung very slowly one last time.  Chorus members start to get butterflies in the pits of their stomachs as that rest or silence approaches.   Will someone sing a fifth “Hallelujah” during the rest?  Or just a loud “Ha” as the silence begins.  Perhaps you know about this from personal experience.

This is why, on the stage of the Academy of Music that December evening in 1956, thirty-nine – I guess – of the forty boys in St. Peter’s Choir choir sang: “Hallelujah, Hallelujah, Hallelujah, Hallelujah” but George Marriner Maull just mouthed the words. I would not be the “the one” to sing a fifth “Hallelujah.”  No one did of course.  And over many more sung performances of Hallelujah that occurred throughout my life, I became completely confident about my ability to mentally count to four as I sang.