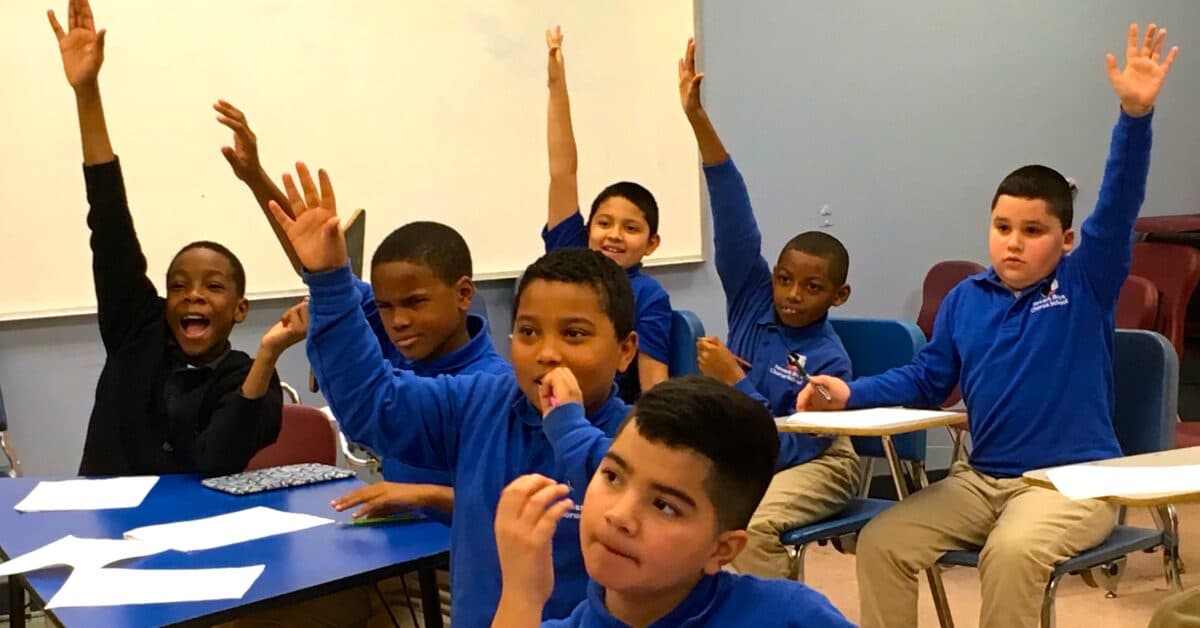 In 2014, I wrote a blog post The Choir Boys about my visits to the Newark Boys Chorus School, a remarkable 51-year-old institution that absolutely transforms the lives of its students.  In this post, I’d like to describe my recent visit this past December.

In the spirit of the season, I chose Handel’s Hallelujah from Messiah as the musical selection to explore with the young members of the school’s Apprentice Choir.  Knowing that the music would be familiar – everyone knows the first two measures the chorus sings – the challenge would be to help them to notice aspects in this work they may have missed in the past.

As is our custom at The Discovery Orchestra, the 5-minute selection was first played straight through with no comment.  It was interesting to note that this play through instantaneously spawned more than a few student conductors. Then, using a printed listening guide containing gaps in the information presented, the boys were then challenged to answer questions posed and fill in blanks in the guide.  As usual, these tasks can only be accomplished if the participants listen carefully to the next short excerpt, recorded or played on the piano…essentially ‘forcing’ the students to give that excerpt their undivided attention and not just hear it.

Having an archival recording of a prior Discovery Orchestra and Chorus performance of Hallelujah made it possible to demonstrate all the ‘tricks’ we employed in that Discovery Concert at the New Jersey Performing Arts Center.   I asked the boys if Hallelujah would have felt very different in the key of D-minor as opposed to D-major.  After listening to our orchestra and chorus perform the first eight measures in D-minor, they all gave this version the appropriate ‘thumbs down’ and negative head gesture.

Musical details such as the spine-tingling trumpet solo beginning on high A-natural and played as the climax of the movement builds, is something one may have heard, but never paying it specific attention.  When asked to raise their hands as they noticed this descending trumpet solo in context elicited obvious smiles of delight.

After exploring the movement in this manner for about twenty minutes, Hallelujah was played straight through for a second time, with the students following along in their listening guides.  The room was noticeably quieter than it had been during the first play through…albeit the last day of school before Christmas vacation!  They spontaneously vigorously applauded the performance this time.  When asked if they’d noticed some of the details investigated earlier, head nods were in the affirmative.

My favorite moment of the afternoon occurred right after the question posed above.  One young chorister insistently waved his hand and said:  “I really liked it when they went to subito piano (suddenly soft) and then to subito forte (suddenly loud.)”  Noticing this dynamic change had likely set off chills…the ‘goose bumps effect.’     “Got ‘ya!”  I thought to myself.

Unprompted by their conductor, Dr. Brian Harlow, the boys earnestly pleaded with him if they could sing a song – appropriately on the text ‘Alleluia’ – for me before I left.  Not content with just one, they proceeded to sing a Hanukkah song as well.   I could not have asked for a more wonderful holiday gift!