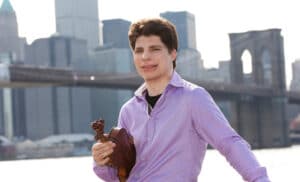 Rachel Deloughrey, primephonic editor, interviewed violinist Augustin Hadelich on this very topic. The young superstar in the classical music world says some striking things: “When I perform violin concertos, they are usually on the first half of the programme but I almost always listen to the second half of the concert, which I greatly enjoy!” Wow! This is what conductors might hope to hear, but I’ve known many soloists who simply do not have the mental space to listen to the second half of a symphonic concert on which they have appeared earlier. And who could blame them after expending so much emotion and physical energy in their own performance? But Augustin Hadelich obviously loves to listen to music – not just perform it!

He goes on to say: “I don’t like background music (for example in restaurants), especially if it is classical, since I invariably start listening and then can’t keep up with the conversation. . .I can never quite understand people who listen to music while walking or running – I would run into things or get lost if I did that.” Precisely. When we decide to give our undivided attention to a movement of Franck (or you fill in the blank) we don’t wish to be distracted.

He also says: “I greatly prefer to listen to music in the concert setting. There is something special about being in a hall with many other people, listening to music being created in the moment.” Amen to that!

But in speaking about his time away from the concert venue Augustin Hadelich says: “I generally listen to music on the computer, either over speakers or headphones. . .The computer I take with me when I travel doesn’t actually have a CD player, so I usually buy the music I want to listen to on iTunes. . .However, I have also found that some of my favourite recordings are not in streaming libraries. And sometimes I find that it’s just nice to take out a CD and hold it in your hand!”I’ve had nostalgic experiences like that with my 33 1/3 RPM vinyl record collection!

How refreshing it is here at The Discovery Orchestra to read our own thoughts on the listening process in the re-affirming words of this brilliant young artist! And thank you Rachel Deloughrey for conducting and publishing this interview. We’ve recommended listening to this particular movement before in this blog – but if you have six minutes, take the time to give your soul an uplifting ‘bath’ in the fourth movement of the Sonata for Violin and Piano by Cesar Franck as played here by violinist Augustin Hadelich and pianist Joyce Yang. You may find yourself moved to tears by this recorded, video performance. It might just also restore your faith in humanity!