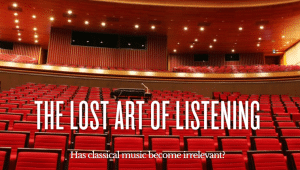 However, I’ve just finished reading an article in The Monthly, an Australian publication, entitled: The Lost Art of Listening “¢ Has classical music become irrelevant? And perhaps the most startling thing is to read the sixty-three comments (as of 11.5.15) this article by Australian pianist Anna Goldsworthy elicited. Wow! There are lots of passionate responders out there who both agree and disagree with Ms. Goldsworthy. . .and each other.

I personally found Anna Goldsworthy’s reflections interesting and not atypical for classically trained musicians who have somehow managed to have performing careers. Sooner or later, we find ourselves contemplating our audiences. Who are the people who attend classical music concerts? Are they ageing? Will there be an audience for classical music in ten or twenty years?

My previous blog Report from the Field referenced the economic issues surrounding professional classical music performance. Those issues are real, and they are pressing. We don’t yet know how those issues will ‘come out in the wash.’ But Anna Goldsworthy, in her wide-ranging editorial on Australian classical music life, touches not only on the economics of classical music, but many topics.

Sometimes, I felt I was reading my own thoughts!

“The advent of recording led to a boom for classical music but also – paradoxically – sowed the seeds of its redundancy. You no longer needed to make music to enjoy it at home; classical music belonged instead to the professionals, whose immaculate craft was pressed into disc for eternity. . .By the 1960s, families were less likely to gather around the piano than around the television; by the 21st century, they were no longer gathering around anything, but communing with private screens in their own private rooms.”

Attention spans, memory, music education, the cultural foundations and traditions of classical music are among the subjects she traces. It’s fascinating to read, but at the risk of sounding like ‘a broken record,’ at the end of the day, those of us who are moved to goose bumps and tears by listening to classical music must do whatever we can to share this experience with others around us.

Obviously, telling people “This music is great! You should give it a try” may be off putting, and a tactic certainly not advocated by Anna Goldsworthy. No! Rather, we must encourage people of all ages – by any creative means we can muster – to have an ‘aha’ around what it is like to give sounds our undivided attention, that is, to listen to rather than just physically hear music. It really is irrelevant whether the music was composed last week or last century. If there are lots of interesting details, and we begin to notice those details, we may find ourselves being very moved indeed!

It was gratifying, in scrolling down the comments, to find this one by Stephen Brown “I am very much aware much of this is the primary driver of work by George Marriner Maull and the Discovery Orchestra.” !