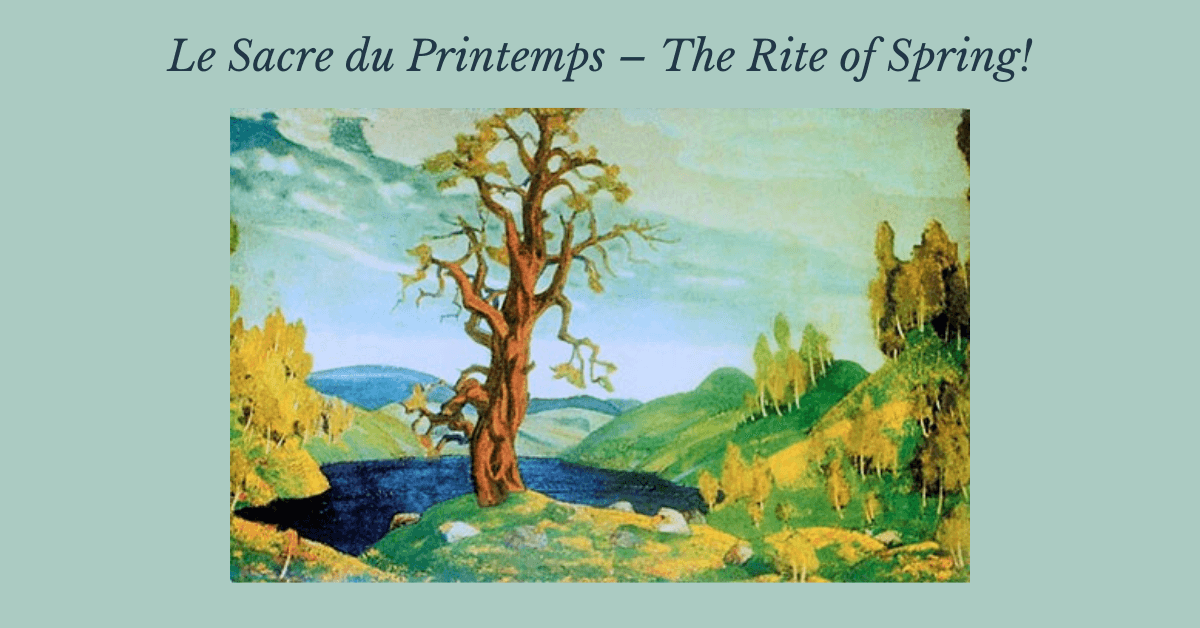 High school music students come up with some pretty funny answers to test questions from time to time. One of my personal favorites was the answer given to: “Name Igor Stravinsky’s most famous composition.” A student, giving it his best shot, wrote: “It’s Right for Spring” referring to the composer’s ballet score Le Sacre du Printemps – The Rite of Spring!

Spring has been on my mind.  Some winters are so brutal, is it any wonder that our prehistoric ancestors felt the need to do something special to celebrate the return of spring, edible plants and game animals to hunt? The only problem with these celebrations, or rites, was that they often involved the sacrifice of human beings – not to mention other living creatures – to make certain that “the gods” were satisfied, duly acknowledged or whatever.

One might hope that, as a species, we would have by now spiritually evolved beyond the need for human sacrifices, but daily news broadcasts from around the world inform us otherwise. . . which is another discussion.

Stravinsky’s score, premiered in May of 1913, caused a near riot at the Théâtre des Champs-Élysées in Paris.  The music is still shocking to many first-time listeners 109 years after the fact.  Stravinsky’s score certainly provides us with a peek into the darker, irrational side of the human personality.

It may seem like a contradiction to my hope expressed above that we have evolved beyond our primitive instincts, but I must say that I find this music incredibly moving. So perhaps I should revise my hope to say that I wish all of us could make use of artistic expressions such as this to purge ourselves of our violent, frightened feelings – to see them for what they are – and then release them so that we need not act out on them physically or emotionally.

The ballet, divided into sections with titles such as  Augurs of Spring, Ritual of Abduction, Dance of the Earth, Mystic Circles of the Young Girls, Evocation of the Ancestors and Sacrificial Dance, was originally choreographed by the great Russian ballet dancer Vaslav Nijinsky. The story is not difficult to follow… ancient Russian tribal people sacrifice a young girl to ritually celebrate the arrival of spring. In this case the victim must dance herself to death. This is, after all, a ballet.

Thanks to the 100th Anniversary production of the premiere mounted by the Théâtre des Champs-Élysées  in 2013 and internet technology, we can all now watch a production featuring the original choreography and costume designs that so shocked Parisian society in 1913. I invite you to take 40 minutes of your time, turn up the volume on your ear buds or headphones, set your computer to full screen and experience your own cathartic rite of spring. If the music at times seems barbarically dissonant… bear in mind the subject matter! The link begins at 04:07 in the video where the performance begins.  While it won’t be April in Paris, it just might be a very meaningful experience.

Stravinsky – The Rite of Spring