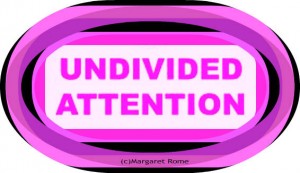 Picture a brand new performing arts center; the orchestra is tuned and ready to play a magnificent symphony; the lights dim. But what if there was no audience? It could happen.

Virginia Johnston, The Discovery Orchestra’s Executive Director, and I recently had lunch with a mutual friend who holds a prominent position at Lincoln Center in New York City. Topics ranged from the financing of professional classical music to the effects of Internet technology on classical music and the future of our beloved art form.

In discussing his own grown children, our friend pointed out their biggest obstacle to enjoying classical music is the short length of their attention spans for any one activity. “They multitask constantly.”

The three of us agreed that classical music enjoyment is dependent upon one’s willingness to give undivided attention to often wordless music for segments of time lasting between 5 and 10 minutes, sometimes longer.

How do we entice people in the Internet age to make such a commitment of their time? And where do we hope this allotment of undivided attention might take place? For the generations of individuals who now ‘live’ primarily on their electronic devices, the where question is extremely important.

If we simply build more performing art centers and schedule wonderful orchestral concerts in them, can we really expect someone who’s never been moved by listening to classical music (for even five minutes) to show up? If you build it. . .they may not come.

My mentor, Saul Feinberg, asked: “How can we best facilitate the goose bumps classical music listening experience?” Saul had the advantage of working with captive teenagers in the Philadelphia Public School System in the 1960’s and 70’s. All students in the system were required by the curriculum standards to take two years of general music classes in the 8th and 9th grades. Those students lucky enough fulfill this requirement under the spell of Saul’s magical personality became committed classical music listeners – in significant numbers. . .70% of them, year after year.

But absent such curriculum standards in schools and a small army of Saul Feinbergs to implement them, what do we do now in 2018? I have laughed, imagining myself driving down streets on weekends with a bullhorn shouting: “Try this for just five minutes! You won’t believe how incredible it will make you feel. It’s really cheap – it’s listening to classical music!” Humor aside, we wouldn’t reach very many people.

We know we have already helped many individuals to become better listeners and to develop a real connection with classical music, and we will continue to find new ways to invite people to sample our content on line, on television and on the radio.

Our most recent review from a reader of this blog. . .

“I have just discovered this program and am so glad I did! I have never watched anything like this that explains complicated music in an easy manner. . .I watched Bach to the Future and plan on watching the others as well. It’s so nice that the program is available through Amazon and free for Amazon Prime subscribers!

P.S. I watched both parts of Discover Vivaldi’s Four Seasons. They are as great as the Bach. Highly recommend!” Amazon Prime Viewer