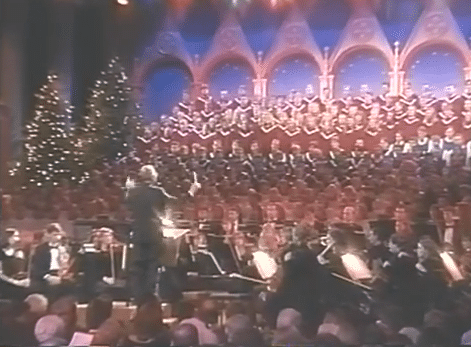 It’s Christmas Eve 2013. (And I guess it was a miracle that we made it past 2012 after all the hype and prognostications to the contrary.) I do know that there is a lot of singing to be done tonight and tomorrow, but of course at The Discovery Orchestra we’re hoping there will be lots of listening, too!

One of my favorite Christmas carols to listen to was written fairly recently – at least when compared to centuries’ old carols – by British composer and conductor John Rutter in the 1990’s. My initial encounter with this music was, as is so typical a story of our times, its use in a television commercial.

The commercial was describing, I’m paraphrasing here, “. . .how safe Volvos are, and how purchasing one of these cars is the best way to take good care of your loved ones.” The most wonderful choral music was in the background. And, in what is ‘standard operating procedure’ for me, I began to ignore the commercial’s message and just focus on the music. So moving! “What is this?” I thought. “I don’t know it!”

Of course, there was no credit given to a composer or to the performers, and so I began a bit of search. . .this was a puzzle to solve. Finally, in desperation, I made calls to the Volvo Corporation, leaving messages in the voice mails of unknown recipients. One of these individuals finally returned my call saying that they had checked with the ad agency that had produced the commercial and had the information I was seeking.

This Christmas Eve, if your so inclined, take four minutes to listen to John Rutter’s “What Sweeter Music.” The lyrics were written by British poet Robert Herrick (1591-1674) and abridged by the composer.

What sweeter music can we bring,

Than a Carol, for to sing

The Birth of this our heavenly King?

Awake the Voice! Awake the String!

And give the honor to this Day

That sees December turned to May,

That sees December turned to May.

Why does the chilling Winter’s morn

Thus on the sudden? Come and see

The cause, why things thus fragrant be:

‘Tis He is born, whose quickening Birth

To Heaven and the under-Earth.

We see Him come, and know Him ours,

Who, with His Sun-shine and His Showers,

Turns all the patient ground to flowers,

Turns all the patient ground to flowers.

The Darling of the World is come,

And fit it is, we find a room

The nobler part of all the house, here, is the Heart,

Which we will give Him; and bequeath

This Holly, and this Ivy Wreath,

To do Him honor; who’s our King,

And Lord of all this Revelling.

What sweeter music can we bring,

Than a Carol, for to sing

The Birth of this our heavenly King,

The Birth of this our heavenly King.

Are You Feeling Blue?

Take Help When. . .And Where You Can Get It!