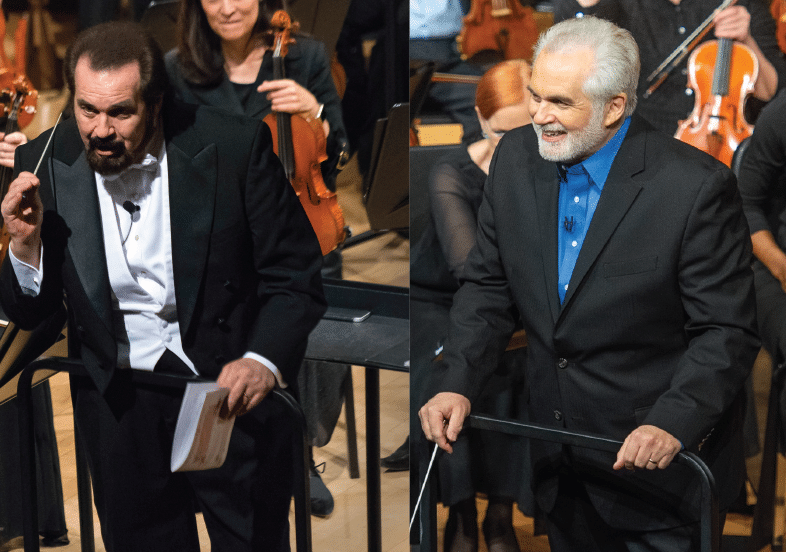 People have been asking, and believe me, no one was more surprised than the members of The Discovery Orchestra when, after last seeing me in the spring, I walked into rehearsal for Discover The Firebird on September 20th.

I first grew my beard immediately after graduating from high school in 1965.  I liked the way I looked and never wanted to change it. That is to say, I have appeared the way you have all known me for 54 years of my life.  Sometime around 1972, my beard began to turn gray. I was then only 25 years old for heaven’s sake!  What to do?  Well, dye it, of course.  Sometime later, 1980-ish, my hair also began to turn.  Yes – you guessed it – I began to dye my hair as well.  But, by 2016 this practice was beginning to get very old.  It was an unwelcome chore and my wife Marcia began asking: “Are you going to do this until you die?”   It got me thinking, but I wasn’t ready to take the plunge.

Fast forward.  In the spring of 2019, my good friend and valued co-leader of The Discovery Orchestra, Executive Director Ginny Johnston said: “George, you know we’ve never engaged an image consultant for any of our previous four television productions.  What would you think about hiring one to consult with you and also think about the look of the orchestra members?”   “Great idea!” said I.

Drum roll.  Emily Zacharias, a Broadway actress with many stage credits, and a fellow resident of Maplewood where Ginny lives, agreed to provide this advice.  Emily, also a good friend of Tricia Tunstall who heads our Education Committee, had attended a number of our Discovery Concerts with Tricia and had also watched our previous television productions.

At the first consulting session, which Ginny also attended, Emily made many complimentary and interesting observations, but two of them especially caught my attention.  One was that, as performers, we should appear honest to the most perceptive members of the audience.  There should not be anything unreal or perhaps not quite believable about us.  (My mind immediately went to the hair dye!) She followed that with suggesting that I consider thinking about whether I was trying to avoid aging.

Mmm.  Well, there was no doubt about the latter.  My October birthday was looming.  72!  Yikes!   Emily went on…would I consider visiting her hair stylist.  Together they would conduct some experiments over the summer to make my hair and beard assume their natural color and to “update” my look.  If I didn’t like the results, we could always change them before the September 22nd recording for American Public Television.  And so, knowing that I was headed for a week in Tanglewood in June ­– where no one would know me – I agreed…not without a degree of reluctance and perhaps even a smidgeon of fear.  By July, I was looking in the bathroom mirror and wondering: “Who is that?”   Even Marcia confessed to being startled as we would wake up together in the morning.

All’s well that ends well.  Everyone who sees the “new me” for the first time says:  “George! You look great!”  In fact, one friend saw me come in the door and exclaimed:  “George, you look real!”   I don’t know what I was so frightened of – the unknown perhaps, or just my profound attachment to the “old me.”  But now…I’m liberated!