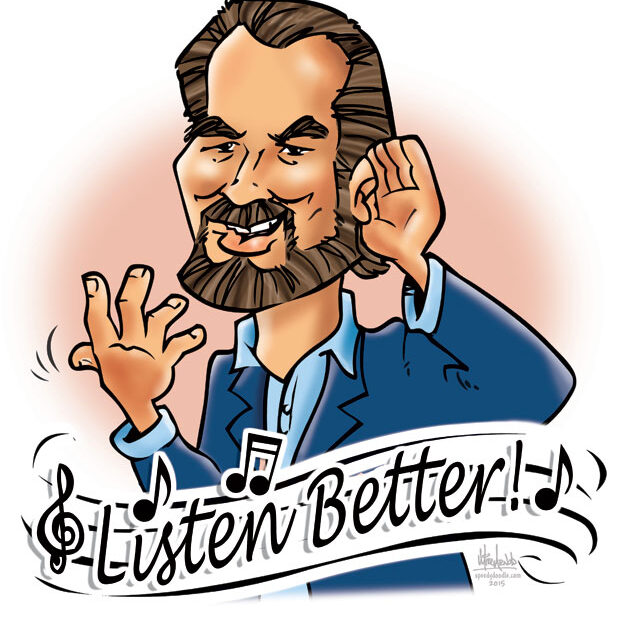 Trepidation or apprehension might be better word choices. As we prepare to digitally record the remaining seven episodes of Fall in Love with Music, I would like to confess that this process has been intimidating. One might assume that creating a television series around a course you’ve been teaching for more than thirty years ought to be the proverbial ‘piece of cake,’ but it has certainly not felt that way.

Imagining talking to people one cannot see – there will be no live audience – has been a psychological challenge. Deciding what must be included and what must be cut from the final scripts has kept me up more than a few nights. Adapting interactive moments that have for years ‘worked like a charm’ in a classroom of students has presented another kind of creative problem to solve. Finding out that a favorite piece of pop-rock music that always ‘knocked it out of the park’ can’t be used – because the television licensing rights are so prohibitively expensive that they would ‘break the budget’ – has been disappointing and at times even exasperating.

And last, but far from least, how do we make this series into entertaining, fun to watch yet educationally meaningful television that can be enjoyed by an age and culturally diverse audience, hopefully for many years into the future?

This is where the gratitude list begins. It is such a joy and comfort to be working with our collaborators at Midnight Media. Dave Emmerling, Bob Camitta, Walter Schoenknecht, Bill McEvoy and Michael Fischbeck are all highly experienced experts in video production who easily generate solutions to the most vexing issues. Having them as foils, co-writers and co-creators goes a long way in reducing the trepidation factor for yours truly.

Being able to sleep at night, knowing that David Walters who has been the audio engineer for all of our television productions will bring his consummate skill to the creation of the final soundtrack, is another major gift. Likewise, our incredible staff members at The Discovery Orchestra – Ginny Johnston, Elliot Dee, Diane Lester and Jeanne Maass – make this process feel more like a family matter than a business exercise. They even hold my hand when necessary.

One thank you cannot be overstated. I learned everything I know about teaching music listening from Dr. Saul Feinberg. This public television series would not be conceivable had I never encountered Saul, my teacher, friend and mentor, and the incredible wealth of instructional and written materials he created. Finally, may I offer a huge ‘Thank you!’ to our Board of Trustees, our donors and our benefactors whose belief in and financial support of this project has made this television series migrate from a goal stated in the Discovery Orchestra’s strategic plan to a reality!