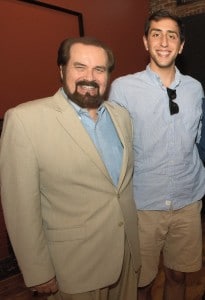 It gave this nine-year-old choirboy a lot to think about. “Were there really angels showing up disguised as regular folks?” “Could they eat pizza and drink coke like the rest of us?” “How did they talk?”

While I cannot presume to literally know what the author’s intentions were, over the years of my own life I’ve come to the conclusion that, at the very least, it means that one should always treat strangers politely, kindly. . .as a matter of course.

A case in point. . .one of our youngest and highly valued Trustees, E.J. Harrison, (and I would hasten to add that we highly value all the members of our Board) when I asked him how it was that he came to us, told me that a former member of the Board of the New Jersey Symphony had recommended that he seek out The Discovery Orchestra.

This conversation took place early in E.J.’s tenure with us, but I never could quite get my head around it. “Why would a former member of the New Jersey Symphony Orchestra’s Board advise a promising young executive to perhaps join our Board?” So it just bounced around in my brain as an occasional visiting riddle to solve.

Eventually I asked E.J. for more info. He indicated that he had met Richard E. Hinson in North Carolina while E.J. was a university student. Richard Hinson was by then living in Chapel Hill, serving on the Board of the North Carolina Symphony (which Mr. Hinson still does.) E.J. had been an intern at the NCS and that was where they met.

I still could make no sense of this. Why would E.J., born and raised in New Jersey, be advised to join our ranks – as opposed to the NJSO? More time passed. The riddle kept making its rounds. More prying. E.J. wasn’t entirely sure we should attempt to contact Richard Hinson, but he nevertheless reluctantly gave us an email address for him.

I wrote Richard Hinson recently primarily to thank him profusely for sending E.J. our way. I began:

“I’m embarrassed to say that I can’t remember, now that I’m 70, whether we had formally met while you were still in New Jersey, but should that have occurred, my apologies – and if it didn’t, ‘Hello’ now!”

“You and I met very briefly on a couple of occasions at the home Rob and Julie Neff, my next-door neighbors when we lived in Princeton. . .These were fund raiser/recitals and there is no reason to think you would have remembered me. . .As far as E.J. is concerned. . .when I discovered he was from NJ, my wife and I started thinking about possibilities, and that is how you and your orchestra came to mind. . .by the way, I was one of the advance readers of Rob’s novel ÌÏber Alles and I saw that you were, too.”

Robert Neff, a former Trustee of The Discovery Orchestra now himself living in North Carolina, and his wife Julie hosted a number of our Intimate Evenings in their beautiful Princeton home with its magnificent BÌ¦sendorfer grand piano. Many people attended. I always try to do my best to be polite to all the guests at our events. Who knew? . . .Angels Unawares.