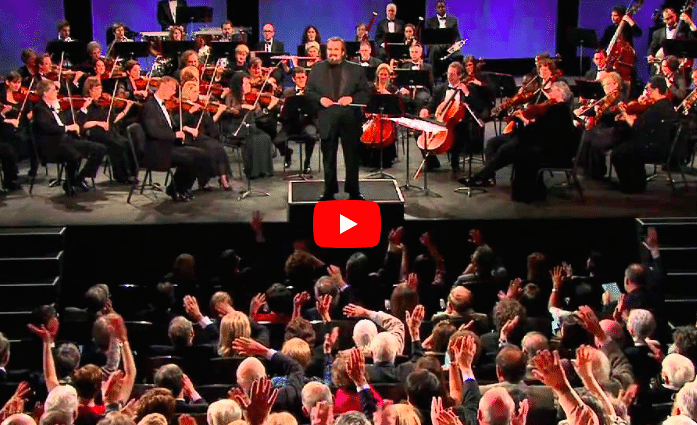 The Orchestra’s second public television production, Discover Beethoven’s 5th©, features a one-hour exploration of the memorable first movement of Beethoven’s Symphony No. 5. Taped with a live audience in 2010 at the New Jersey Performing Arts Center, the show also includes a performance of the other three movements of the symphony.

Following the initial performance of the first movement, there is a series of engaging interactions between Maestro Maull and the audience as this music is investigated. Audience members are cajoled to respond to questions that can only be answered by carefully listening to the next musical excerpt. Another unique feature of Discovery Concerts involves the use of a Listening Guide. This simplified “picturization” of the score with numbered musical events is referenced throughout the discovery process. It provides a tool to help audience members visually follow and stay centered in the music. After the exploration, the entire first movement of Symphony No. 5 is played straight through again. This second time through provides an opportunity for the live and virtual audience – having just become more aware of musical details – to have a very focused listening experience.  Audiences always rave that the “second performance” sounds so incredibly different and revelatory.

Discover Beethoven’s 5th was written and hosted by George Marriner Maull and produced and directed by Jeff Friedman. The first hour of the program was distributed nationally by American Public Television from 2011-2014. The show was nominated for a 2012 New York Emmy Award and received two 2011 Telly Awards.