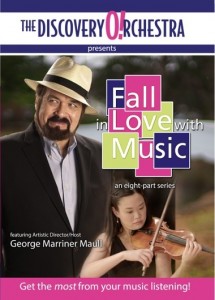 Fall in Love with Music© is a fun exploration of the listening process. Developed over years of classroom and lecture interaction, this eight-part series offers streamlined, effective pathways to musical understanding based on the educational strategies of Dr. Saul Feinberg, a pioneer and recognized authority in the teaching of music listening skills and a mentor to Maestro Maull.

The episodes are: Our Musical Focus; Why Aren’t We Listening?; Is This Music?; The Elements of Music; How Listening Affects Us; Paragraphs Without Words; Leave It to Beethoven!; and Putting It All Together.

Written and hosted by Maestro Maull and produced by Midnight Media Group, Fall in Love with Music was distributed nationally by American Public Television from 2016 through 2019. It is currently available on Amazon Prime Video and is part of the Films Media Group streaming catalog for educational institutions. The series received two 2017 Telly Awards.

Distributed nationally by American Public Television (APT), the program is also airing on public television stations across the U.S.:

See if the show is being broadcast in your state.
View broadcast schedule by date.

Fall in Love with Music DVD