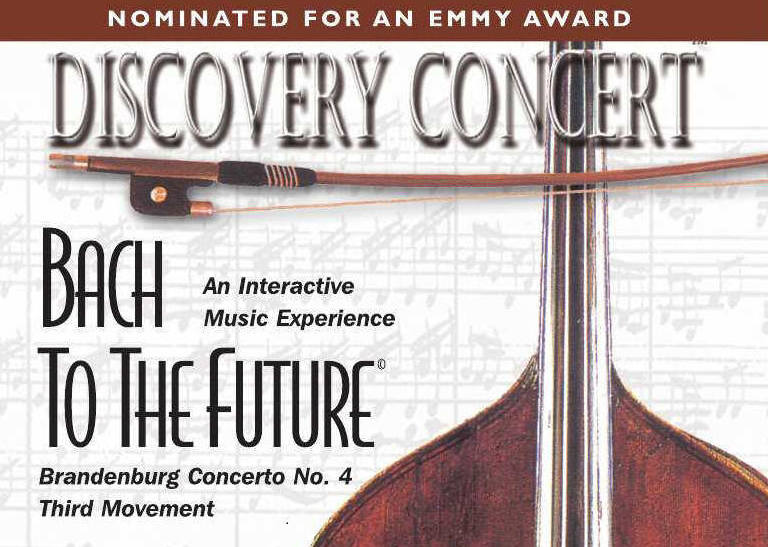 Bach to the Future© is a one-hour educational program featuring an interactive look at J.S. Bach’s Brandenburg Concerto No. 4, Third Movement. Taped with a live audience at the New Jersey Performing Arts Center in 2002, the show highlights why Bach’s music has remained as exciting as when it was written. Soloists for the performance were Peter Winograd, first violinist of the American String Quartet and Discovery Orchestra concertmaster, as well as recorder soloists Stephen Hammer and Nina Stern, two of the country’s leading players of baroque woodwinds.

Artistic Director and Conductor George Marriner Maull introduced the interactive Discovery Concert format in 1997 to enthusiastic audiences in New Jersey. Since then, thousands of concertgoers and millions of viewers worldwide have engaged with these teaching concerts in which Maestro Maull uses an entertaining style to help both classical music novices and experienced concertgoers discover “a-ha” moments while actively focusing on musical details.

Written and hosted by Maestro Maull, produced by Elise van Stolk and directed by Jeff Friedman, Bach to the Future© was initially distributed nationally by American Public Television from 2003 through 2006. It is currently available on Amazon Prime Video and is part of the Films Media Group streaming catalog for educational institutions. The program was nominated for a 2004 Mid-Atlantic Emmy Award for Outstanding Performing Arts Program.

Bach to the Future – Listening Guide

Bach to the Future – Study Guide for Teachers

Bach to the Future DVD