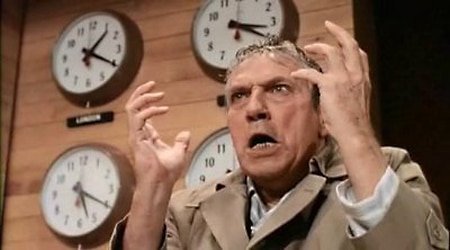 I’m not actually “mad as Hell” – although, who among us who saw the 1976 film Network can ever forget the incredible scene in which we are urged by fictional news anchor Howard Beale to go to our window and yell: “I’m as mad as Hell and I’m not going to take this anymore!”

Let’s just say that I’m annoyed and feel like I can’t take it anymore. What is it that I’ve grown weary of? It could be summed up by the liner notes for a book by Julian Johnson given me this past October by long term friend Clifford Rangnow:

“During the last few decades, most cultural critics have come to agree that the division between ‘high’ and ‘low’ art is an artificial one, that Beethoven’s Ninth and Blue Suede Shoes are equally valuable as cultural texts. In Who Needs Classical Music? Julian Johnson challenges these assumptions.”

And ‘challenge these assumptions’ Mr. Johnson does indeed. Composer Julian Johnson is a Cambridge University graduate who now lectures at Oxford whose writing is decidedly not for the faint of heart. His 130 pages on this subject are brief but dense. Many paragraphs require a second reading.

But before we go further, let me go on record (all puns intended) as saying that I still have my 45-rpm vinyl copy of Blue Suede Shoes. I loved that Elvis song the first time I encountered it – still do. But does it ‘do’ for me what the 5-minute third movement of the Bach Brandenburg Concerto No. 4 does for me? Well, ‘no,’ in a word.

I have been moved to my depths by instrumental folk music and folk songs like Johnny Has Gone for a Soldier, popular during the American Revolution. And I thought my head would explode with happiness the first time I listened to, under headphones, Good Day Sunshine from the Beatles 1966 album release Revolver.

Saul Feinberg, my mentor, would ask his students: “Which do you think is more challenging – to invent a truly moving melody or to be able to invent incredibly moving ways to alter or change that melody?” Truth is, composers such as Beethoven and Mozart could do both in almost unimaginable ways.

In order for a composer to trigger what Abraham Maslow called a ‘peak experience’ – a moment of ultimate transcendence for us – it may well take more than two minutes of music. The very idea of facilitating this kind of emotional/psychological state in us, the listeners, using abstract musical sounds with no words is mindboggling just to contemplate.

I had the incredible privilege of listening to the Mozarteum Orchestra of Salzburg live for the first time in my life last night at the New Jersey Performing Arts Center. It was an amazingly wonderful concert on many levels, but perhaps none more so than when the ensemble, under British conductor Matthew Halls, performed the final movement of Mozart’s Symphony No. 41. Using a simple four-note theme, which Mozart did not invent but borrowed from Gregorian chant, he constructed one of the most powerful musical statements ever conceived by anyone! Do you have almost 7 minutes?