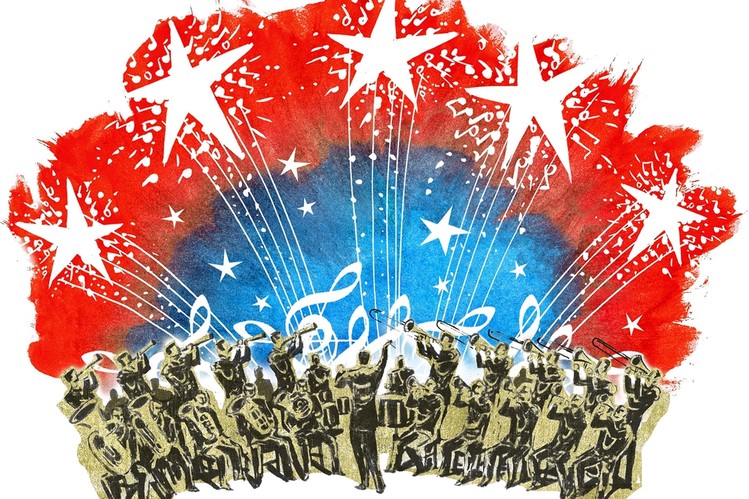 Having just displayed our American flag, a flood of childhood memories associated with this holiday fills my brain, and the first three words that come to mind on Memorial Day are these: John Philip Sousa.

My personal Sousa mania began long ago in the basement of our home on Crispin Street in Philadelphia. My grandmother’s victrola was down there, and for those too young to know what a victrola is – it is a mechanical wind-up device that plays 78-RPM records. I know we’re speaking ‘dinosaur-ese’ here, but that victrola was a magical device that captured the imagination of my brother and me long after the family acquired the Gimbel Brothers electronic portable monaural record player that I referenced in my blog What is Maullaria?

Nana also had a collection of Sousa marches in the 78-RPM format and yes, I still have some of them! My brother and I would put one of those ‘babies’ on the turntable, turn the crank, push the release lever and voila. . .Sousa heaven!

Memorial Day, as intended, had a somber side. There was the car ride to the cemetery where my mother’s brother was buried. He had been killed in action in 1943 during World War II, and our family would place a wreath on his grave each year. Even now, I mark the day by opening the case that contains the Purple Heart Medal posthumously awarded Uncle Howard and re-read the letter of condolence sent by President Roosevelt. Always a difficult observance for nana, granddad and everyone else in the family, this wreath laying was the day’s first order of business.

Then came a much-anticipated event, the annual parade along Frankford Avenue and the opportunity to experience Sousa – live! I know there was a lot being commemorated each Memorial Day but it was always the music played by the marching bands that really got me. And finally, the family picnic in the backyard commenced with games of horseshoes, a little ‘yard league’ baseball, hotdogs, hamburgers, root beer and, finally, vanilla ice cream with strawberries. What a collision of sad and happy memories – all bound up in the sound of Sousa marches.

We invite you to indulge yourself in Sousa’s The Stars and Stripes Forever March. And if that’s not enough John Philip Sousa for you. . .go for more! Here’s a link to a long string of his marches on YouTube that begins with El Capitan!