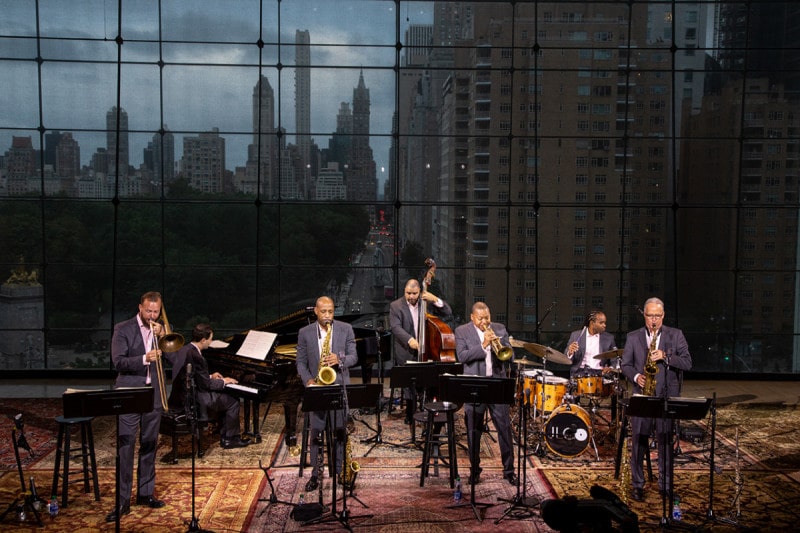 Responding to a last minute invitation from close friends in Maryland, Marcia and I agreed to make the two and a half hour drive to meet them on October 3rd in Mt. Gretna, Pennsylvania.  We would celebrate Marcia’s birthday together.

The drive was beautiful, owing to the fall foliage and the weather… sunny, if a bit nippy. Our friend, Douglas Blackstone, had formerly been the executive director of Gretna Music.  For decades this festival has presented its summer outdoor concert series in the Mt. Gretna Playhouse with its open-air covered seating.  But, sadly, like so many festivals around the world, their stage was silent this summer due to the pandemic.

Doug has maintained contact with the festival staff and found out that the Jazz at Lincoln Center Orchestra Septet under Wynton Marsalis had agreed to appear at Mt. Gretna the first weekend in October.  They would be performing Democracy! Suite, a new composition by Marsalis who said in an interview: “It’s a new suite of pieces inspired by the challenging times in which we find ourselves.”

Sounded good to us, so off we went!  After having a pleasant picnic lunch with Doug and his wife Judith, the four of us walked to the Playhouse.  The seating capacity of the shed is 700 seats, of which only 150 were sold.  Too cool to remove our jackets, I was concerned for the musicians, but those worries proved completely unfounded.  The septet filed on stage to thunderous applause and cheers from the live-music-starved audience members. Quite possibly, this was the first live performance most of us had attended since March.

The entire audience, I swear, burst into tears when the Jazz at Lincoln Center Orchestra Septet began to play.  It was emotionally totally overwhelming to see and listen to them play those first notes after all this time spent at home.

As is traditional in jazz performances, the players were introduced and re-introduced by Wynton Marsalis to the small crowd throughout the course of the concert. It makes you feel as though you’re meeting old friends of the host.  Wynton Marsalis also had a little commentary on each movement, but as he said: “We’re not going to be doing much talking. We haven’t played in so long we don’t want to talk. We’re here to play jazz.”

The individual movements of Democracy! Suite were quite moving: I – Be Present “our democracy demands that we all be present;” II – Black Lives Matter “needs no explanation;”   III – Ballot Box Bounce;  IV – The Dance That We Do “about different protests I saw in New York;” V – Deeper Than Dreams “for all of those who did lose loved ones during this time;”  VI – Out Amongst The People “inspired by me seeing Jonathan Batiste playing the piano in a crowd at a rally;”(they omitted VII) VIII – That’s When All Will See.

A really wonderful birthday present for Marcia, and a very special time for every one of those one-hundred fifty socially distanced, masked attendees, including me!  The Jazz at Lincoln Center Orchestra Septet will record this work.  I highly recommend you take a listen when it’s released.