Music in the Bar 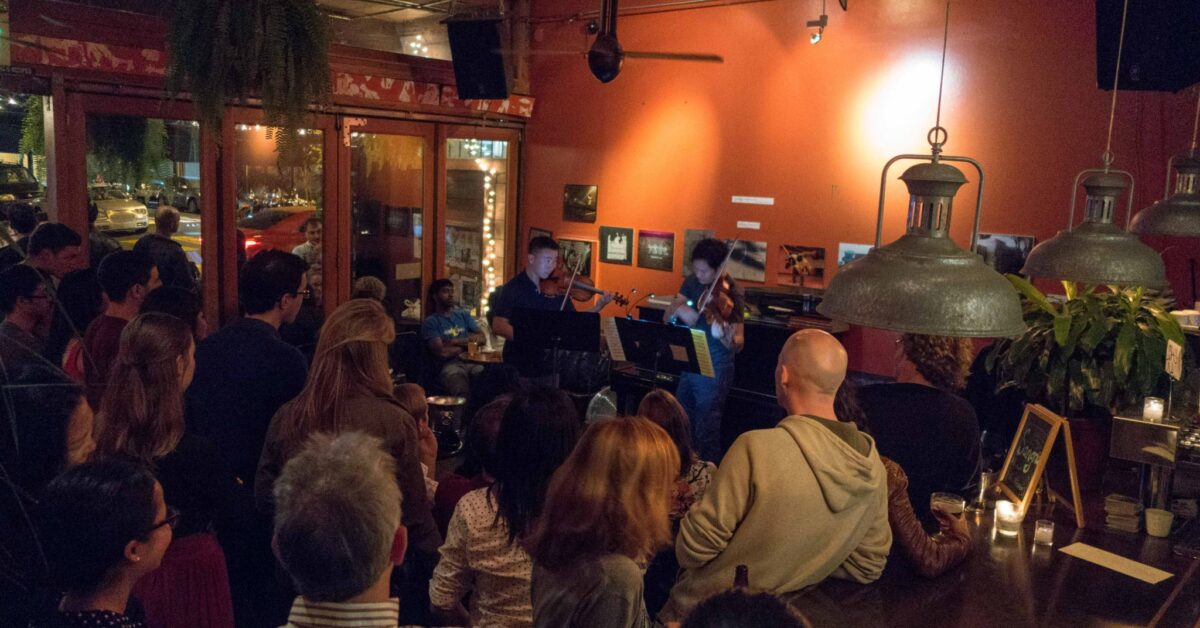 Many of us have been in bars, clubs and restaurants where there was live music. We’ve been there when trios played and when a lonely singer was holding forth. The repertoire might have been jazz, folk, traditional, ethnic or pop-rock. Infrequently, if ever, it was classical. Regardless of the occasion, except perhaps in some jazz clubs, the patrons ate, drank – in the old days smoking cigarettes – and conversed as the music was performed. . .in the background.

Fast-forward to 2006 and the birth of Classical Revolution, the brainchild of San Francisco-based violist Charith Premawardhana. The organization performs classical chamber music in settings like those described above to packed houses of roaring fans. They have chapters in thirty-two cities across the US and southern Canada from Vancouver to San Diego to Miami to Montreal and six chapters in Europe in cities such as London, Paris and Berlin!

Julia Lurie, in a recent Mother Jones article, notes that according to Premawardhana “The reason that more young people aren’t interested in classical isn’t the music, he explains, but the setting: tickets are expensive, and you have to dress up and be quiet for hours. ‘It’s restricting for a lot of young people.'”

I’d also add that many young people aren’t interested because they have been programmed since birth to believe that song is the only form of music that exists. And a corollary to this is: “Why would anyone ever want to listen to any music that doesn’t have words for five minutes – let alone twenty or forty minutes?” They, like the rest of us, have also been trained not to listen to music at all, but rather ignore it as a 24/7 background to all thoughts and activities courtesy of our electronic technology.

Lurie adds that “His goal for Classical Revolution is simple: ‘It’s high art, but it’s not high brow. We’re taking it seriously and playing passionately, but we’re taking out all the other stuff that you get in a normal classical music setting: the formal dress, the formal attitude, the stuffy environment. The music is kept at a high level but the rest is chill.'”

“Whether Classical Revolution, as its name suggests,” Lurie continues “will truly rejuvenate the classical world is up in the air. I can hear the complaints of professional musicians already: ‘How are you supposed to play with the murmur of the bar and the background noise of the street? How can you expect listeners to really hear the subtleties of the phrasing and the dynamics if they’re constantly hearing the tinkle of drinks being poured”Óespecially if they’ve already downed a glass themselves?'”

My guess is that they are probably not noticing all the detail that they would if they were completely present with the music. But if an organization is exposing thousands of “under thirties” to classical music in a space where they enjoy coming to socialize, this can only be a good thing. We can hope that these patrons will be so moved that they become better listeners over time, and perhaps decide to give some classical music their completely undivided attention. I believe that some percentage of them likely will.

I encourage you to read the short article cited above in Mother Jones where you will learn, among other things, that the young music school grads of Classical Revolution are doing these performances, at least for the present, as volunteers!

Well-played classical music should be available in venues such as bars and clubs as well as in traditional concert halls, and of course in the privacy of your own earbuds. How to finance live classical music played with high artistic standards, regardless of the venue, is another question. But we applaud Charith Premawardhana and Classical Revolution. If you find yourself in San Francisco, Louisville, New York or Amsterdam or any of the other thirty-four chapter cities around the world, go to their website and find out when you may take in an upcoming performance – live!