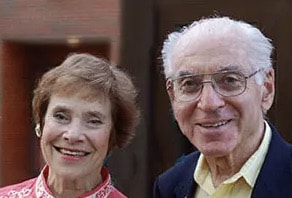 Eleven days ago Marcia and I attended a moving celebration of the life of New Jersey philanthropist Judy Weston.  We went to the event knowing that Judy was renowned for her “inexhaustible compassion and generosity.”  We returned home barely able to comprehend the magnitude of the extraordinary life she led for 87 years until her death last year on October 9, 2020.  Judy shared sixty-six of those years with her husband Josh, an equally amazing human being.

Judy served on the board of the Museum of Natural History and the National Dance Institute in New York City.  Locally, among other non-profit volunteer responsibilities, she served as President of the Montclair Adult School – where our paths first crossed.  Judy took several of our music listening courses at the Adult School and subsequently became a patron of The Discovery Orchestra, generously donating through the Josh and Judy Weston Family Foundation both general operating support and significant gifts to our Discovery Concert© productions distributed by American Public Television.

Josh and Judy demonstrated an absolute commitment to education.  They set up a program to recognize outstanding teachers in the Montclair School District as well as Montclair High School’s Student Science Scholars Program which allows MHS students – more than 800 of them since the program began – to participate in laboratory work at Montclair State University.

Longtime benefactors of both the New Jersey Performing Arts Center and the New Jersey Symphony Orchestra, where Josh is a Lifetime Trustee, the Weston’s have also supported the Montclair Art Museum and the Montclair Film Festival.  Judy, a trained dancer and devotee of dance, supported the New Jersey arts community in every way she could throughout her life.  As her daughter Heather said at the October 9, 2021 celebration honoring her mother: “She was a zealot and an evangelist. If she loved something, she would not relent until you loved it, too!”   At The Discovery Orchestra we are extremely grateful for the financial support of Judy and Josh Weston over the years.  We continue to miss Judy, but take comfort in knowing that Josh is still available and willing to offer advice and help with our public television shows.  Judy and Josh Weston, two outstanding individuals, who prove that in some marriages 1+1 does not = 2, but rather = 10!